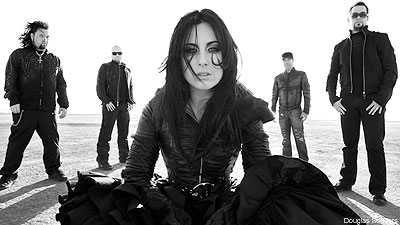 What do you get when you cross former members of Evanescence with a past 'American Idol' contestant? We Are the Fallen, of course. Featuring Carly Smithson on vocals, We Are the Fallen released a remastered version of their debut single, 'Bury Me Alive,' featuring an orchestral outro last month. Today, Noisecreep premieres the official video for 'Bury Me Alive.' The video treatment was conceived by director Kyle Newman and his actress wife Jamie King. Members of We Are the Fallen say the concept was kismet.

"Our whole idea for this video while recording the song was in our minds," Smithson tells Noisecreep. "We never met Jamie nor did we meet Kyle, and the label put out for treatments. Kyle and Jamie responded and sent treatments. It stuck out like a sore thumb from all the treatments we got. It was exactly what we'd thought in our minds. We'd never met them, never talked with them and yet they saw what we saw. It was really, really cool. We were like 'That is exactly the idea we were going for with the video.' It was like we were all on the same wavelength or picking each other's brains or something."

Using the stages of a burial as a metaphor, the video tells the story of a relationship ending after being sold-out or disillusioned.

We Are the Fallen will release their debut, 'Tear the World Down,' May 11 in America via Universal Republic. The band will hit the road with HIM later this month for 28 dates. That tour kicks off March 26 in Philadelphia.