HIM have just announced dates for a North American headlining tour. The trek will be in support of the Finnish group's upcoming Tears on Tape album. The May 2013 run will make scheduled stops in both Los Angeles and New York City (tour dates below). Tears on Tape will be released on April 30 on Razor & Tie in North America.

A special pre-sale for the House of Blues, Ticketmaster, and Citibank will start on Wednesday, Feb. 20 and tickets will go on sale to the public on Friday, Feb. 22. Tickets will be available here. 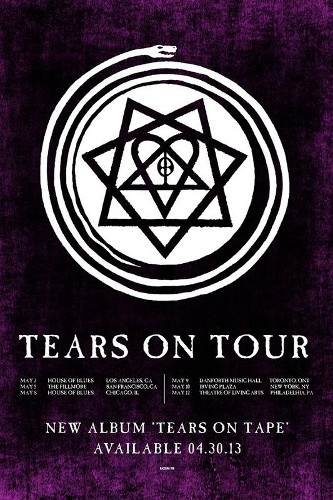 May 5 – San Francisco, CA- The Fillmore

Follow @Noisecreep on Twitter | Like Us on Facebook | Sign Up for Our Newsletter
Filed Under: him
Categories: News, Tours
Comments
Leave A Comment
Battle Royale: HIM Hold Off Halestorm on Top 10 Video Countdown
Battle Royale: HIM Overtake Black Label Society on Top 10 Video Countdown
Battle Royale: Black Label Society Edge HIM for No. 1 Spot on Top 10 Video Countdown
HIM Embrace the Dark Side in ‘Into the Night’ Video
Volbeat Teaser Video Unveiled for Rock Allegiance Tour
HIM’s Ville Valo Looks at Life Through Dark Ray-Bans, Loves ’60s Girl Groups
HIM, ‘Tears on Tape’ (VIDEO PREMIERE)
HIM, ‘Tears on Tape': Finnish Gloom Gods Return With Title Track to Their Upcoming Album (SONG PREMIERE)
Alice in Chains Want You to Decode Their Album Title, HIM Sign New Record Deal + More News