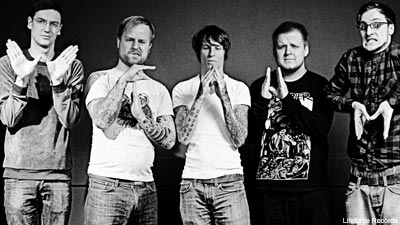 Germany's War From a Harlot's Mouth is quite the vivid band name. It almost always has us do a double take. Despite its colorful nature, the moniker has absolutely no historical or poetic reference nor is it steeped in a super deep meaning. It's just fancy verbiage for a liar and not just a liar of the femme persuasion, since a 'harlot' is usually a lady. "The name is about a lying person, that's all. It's just a really complicated way to say that," guitarist Simon told Noisecreep. "'Harlot' doesn't stand for a woman or a female person, by the way. It's just the word we picked for a random person."

WFAHM are currently kicking up dust on the Hell on Earth Euro tour with Earth Crisis, Sworn Enemy and Thy Will Be Done. "Our friends Neaera are on the package, too, so we actually have some German speaking dudes on the bus, which is pretty cool," Simon said. "After the tour, we'll get into the songwriting for our next record. We have a lot of ideas and it's going to be a lot of fun and, as always, a challenge."

The band will enjoy time off the road at the end of '09, but that doesn't mean a period of inactivity. Simon said, "We'll be stuck in the rehearsal room though, spending a lot of time on the writing process." 2010 will bring a headlining tour lined up through Europe with Arsonists Get all the Girls and Salt the Wound. Simon commented, "We will try to make it back to the U.S. in April and will be touring Japan in May. We haven't been there yet, and it's a dream coming true."

Additionally, WFAHM shot a video for 'Crooks at Your Door,' which was directed by a close friend of the band, who was able to share and actualize the band's vision. The guitarist revealed, "We worked out the concept together and everyone that has been involved in the shooting and editing has done an amazing job. Our budget was pretty small, so nobody got paid and they were still dedicated as hell," which proves that inspiring art isn't always a slave to commerce. The song's lyrics are based on WFAHM's critical view on religious groups. "The song title is inspired by Jehovah's Witnesses, who come to your house, ring at your door and try to sell their 'beliefs' to you," Simon said.

One person who doesn't care about what other's think is bassist Flip, who Simon says wears girly clothes, such as purple pants, pink undies and Hello Kitty socks! "We make a lot of fun about it, but he doesn't care at all. He is wearing that stuff with pride," the guitarist said. To each his own!