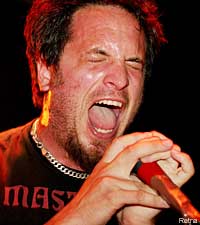 Long Island, N.Y. is known for many things. The Big Duck, for instance. The Hamptons. The L.I.E. Amy Fisher. It's where guys like Jerry Seinfeld and Billy Joel grew up. It even has its own intoxicating brand of iced tea. But for some of us, Long Island will always be known as a breeding ground for some of the hardest-hitting music of the late '90s. One of the Island's heaviest bands was Vision of Disorder, who split back in 2002.

Thankfully, the band has seen fit to return to the scene. Vision of Disorder announced its reunion back in October 2008, and the boys are, at this very moment, crafting material for what will be VOD's long-awaited return. We managed to pull frontman Tim Williams away from the band's writing stages for a quick update ahead of their four-show stint on this summer's 10 for $10 Tour – a traveling collection of hardcore acts like Terror, Poison the Well and others.

"We're just writing now, and things are going pretty good," Williams told Noisecreep, adding that it's likely Vision of Disorder will try out some of the new material on the thirsty crowds. "We're staying busy. We're not rushing too much, and we've got like nine or 10 songs/ideas going for the new record."

One of the songs, he says, will be called 'At Arm's Length,' while another, they've dubbed 'Annihilator.' The band is aiming to start recording the album this winter, with hopes of releasing it sometime next spring or summer. And while it's still way, way too early to tell what the finished product will sound like, Williams says the songs they've finished so far "sound very VOD, kind of old Imprint-y type songs, but with a new, good energy to them. Raw. Good stuff. There's elements of VOD-style hardcore in a couple of songs, which is exciting to see again."

The band is mulling over a long list of producers they're considering, and are, for the first time this far into the process, without the old record label ball and chain. Williams says he's just excited to be back with VOD "Everybody is pretty happy, and just rolling with it," he says. "We just get together, to get away from our every day lives, and jam and have fun again."

They have not had any talks with labels yet, he says. "We're not ready," he insists. "We're about to record a real proper demo. We had recorded a demo earlier, and we gave that to a couple of people. Maybe one or two. The next demo will go out to labels, but we are not going to sign to a big label. We're not signing any lengthy f---ing deals with anybody. We want to sign for one record, and we want to own a significant percentage of the record, and whoever's going to field that kind of deal is who we're going to go with.

"VOD doesn't need a label to break us or any bulls--- like that," he continues. "We've already done the hard work during the '90s of getting the VOD name out there, so we don't really need a traditional record deal from anybody. We'll probably end up signing with a strong indie label. We're holding all the cards, and when we're ready, we'll know."