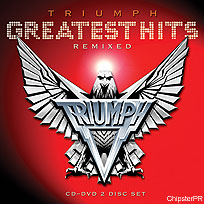 Canadian rock legends Triumph are back with a new, hit-laden CD/DVD combo called 'Greatest Hits: Remixed.' As the name would suggest, the songs included in the compilation were all specially remixed by Rich Chycki for this release.

For the CD component, Triumph give fans 14 tracks, including the new single 'Love Hurts.' The song is a previously unreleased cover of the Nazareth hit.

The DVD features 11 live performances of classic songs like 'Lay It on the Line,' 'Magic Power' and 'Allied Forces.' There's also some bonus footage including bootleg shots of one of the band's famous laser light shows. The DVD clips were filmed over Triumph's long career.

"We have been planning this release forever," Triumph bassist Mike Levine said in a press statement. "For years, Triumph fans have been demanding that we give them a fresh greatest hits package and they are going to love this one."