The wheel in the sky has been turning faster for acts like Journey in recent years as acts like them and jukebox heroes Foreigner reunite and fill arenas like it was 1983 all over again.

It seems if you used to get played on FM radio rock stations 25 years ago and you've got at least one original member still alive (see Lynyrd Skynyrd), the time is now to cash in on a nostalgia tour.

There's been one conspicuous absence from the reunion circuit, though -- Mississauga, Ontario power trio Triumph. In the last 20-plus years the band -- made up of guitarist/vocalist Rik Emmett, drummer/vocalist Gil Moore and bassist Mike Levine -- have only played two shows together, despite all of them being healthy and capable.

It's not like band behind such albums as Allied Forces and Never Surrender didn't want to follow in Journey and Foreigner's footsteps. They just, kinda, haven't found the right timing yet.

"We had those offers," Mike Levine tells Noisecreep, looking at the reunion tours his old arena rock peers have been doing. "And god bless Foreigner, but not even Mick [Jones] is in the band anymore. He got sick last year and they replaced him I think [Jones returned to Foreigner recently after taking a leave of absence to have aortoiliac bypass surgery]."

"He wasn't even in the band for awhile. There was nobody original from Foreigner in the band and they just kept playing."

Still, Levine respects the fact that their peers are working.

"They're out there slugging it out and they're making some money," he says of Foreigner and Journey. "They're playing casinos and fairs and some amphitheaters and it's a good package for fans to see because they're singing some quality songs. Foreigner had a mitt full of hits. And like Journey's doing, those were our contemporaries. We all fought it out for who sold the most shirts and who held the house record and it was always a war. But a fun war and we were all friends."

Watch 'Lay it on the Line' Video

For a long time the members of Triumph weren't actual friends. Twenty years, in fact. It wasn't until Rik Emmett's brother Russell, who was good friends with all three band members, got really sick and prompted them to get back together that the trio put aside their long simmering personal feuds.

"Rik's brother, he was the motivator," says Levine. "He got really sick. And Russell kind of went after Rik, and he was dying, he was that sick, and he said 'Y'know, you should make peace with Mike and Gil. They were your brothers for so many years and as a parting wish it would be great if you could do that...'"

And so the seeds of Triumph's triumphant return were sown.

Triumph considered following in their t-shirt sale adversaries' footsteps. The band reunited in 2008 for two shows -- the almost-cancelled due to migraine appearance at the Sweden Rock Festival, which has recently been released as a live CD/DVD package, Live at Sweden Rock Festival, and a date at the Rocklahoma Festival -- and have had tentative ongoing plans to return in a bigger way, including a full tour in 2009. But they got cold feet.

"The agents had buildings on hold," says Levine. "We had 18 dates in Canada and 30-odd dates in the States. And then the recession hit really badly in January and the wheels came off and everyone was like, 'Who knows what might happen?' as opposed to 'We're gonna sell out everywhere. We have a great package.'

"And it was then 'What happens if we only do three-quarters of a house?' Nobody's going to be happy. So the promoters and the agents and us,we just sat down and went, 'This has become a high risk event. Why don't we just wait it out? This won't last long.' It kept on going and going."

Watch 'Somebody's Out There' Video

Unfortunately, it's still going, and Triumph, who were once considered neck-and-neck with Rush as Canada's biggest rock band, have stayed on the bench waiting for right moment to get back in the game.

In their day the band were considered stage show innovators with elaborate lighting, laser and pyro -- they even wrote a self-referential song about it, the "Blinding Light Show" -- so, if they do ever decide to follow in the footsteps of Journey and Foreigner, it's going to be all-in.

"The one-off shows, after doing the Sweden show and the Rocklahoma show, they're not worth doing," says Levine. "It's way too much work to be honest with you. We played every day for 40 days together [to rehearse for those]. It was fun, and putting a show together, the actual time it takes. If, y'know, someone comes along and wants to pay us a million bucks to play a private party we'll probably do it. But as far as going out in the public eye as a one-off, I don't think so."

For the first time in decades all the members of Triumph are friends. So all they're really waiting on is favorable conditions to go on tour and they may be back fighting the good fight once again.

"We're all good," says Levine. "We talk all the time. We go for dinner once every six weeks.

"We're all fine together. If the opportunity comes around and we're all into and the economy's good... yeah, it's not necessarily all off the table from a tour point of view." 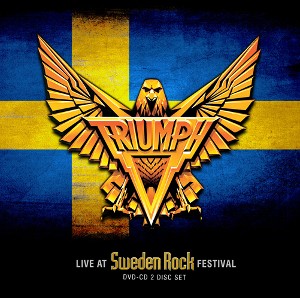