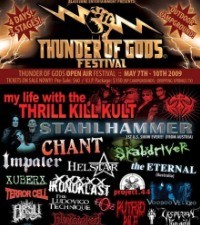 According to various reports, more than 100 bands are on the hunt for Will Pruett, a Dayton, Ohio, man who organized last weekend's Thunder of Gods Festival in Dripping Springs, Texas. That's because none of the bands were paid to perform before Pruitt bounced after the event's second night. The four-day outdoor fest promised the first U.S. appearance of Stahlhammer, as well as a lineup that boasted Chant, Absu, Helstar, Impaler, and My Life with the Thrill Kill Kult.

With tickets priced between $60 and $150, fans and the bands who made the trip out to Texas are wondering where the money went? A MySpace page set up for the festival has since been removed (last login was May 7), but the last few messages left were from bands, raving mad about how everything went down. One person even chastised Pruett's selection of vendors. "I'm going to send you a package of this sliding shit that has been falling from my ass for the past two days from the" food from the event, wrote one disgruntled patron.

Metal Martyr reports that, on Saturday morning, the bands who were set to perform from that point on discovered that Pruett had fled the scene. He didn't pay any of the bands, and did not pay for the use of the campgrounds, where the poorly-promoted festival was staged, and that the rest of the festival has been cancelled, leaving dozens of bands stranded at the airport.

According to one report, Absu received a short text message from the promoter soon after it arrived, stating that the concert was cancelled and that nobody was coming to pick them up. Noisecreep tried contacting Pruett, and numbers for him listed under Global Athletic Positioning Firm were disconnected.