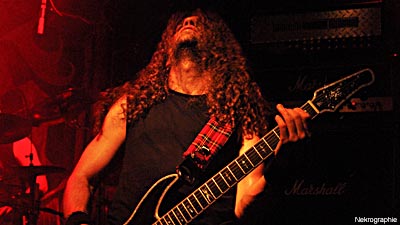 It's a long way to the top if you wanna rock 'n' roll, and while some musicians are content to focus all their energy on one project, many others find themselves saddled with a crackling excess of creative energy that leaves its bearer no choice but to invest their (usually limited) free time into other ventures.

Take, for example, one Vis Crom. This latest addition to American black metal icons Absu as a session/touring guitarist, Crom (born Matt Moore) juggles a day job, two other bands, a record label and the devil knows what else on a daily basis. Noisecreep caught up with the heavy metal nomad shortly after he landed back on American soil after a successful European run with Absu, Zoroaster, Razor of Occam and Pantheon I and tried to figure out how he does it.

When he's not melting faces onstage or laying down riffs in the studio, he spends his time running Creeping Vine Productions, through which he has released the Woe LP as well as a Coffins/XXX Maniak split and many more. He divulged, "Creeping Vine has unhallowed new curses coming in 2010, including a Dissection tribute with deep underground bands that will overthrow the drivel we hear now."

When with Absu-loving Noisecreep writer eagerly grilled him about the band's next album and whether he would be contributing to its creation, Vis Crom elected to keep us in the dark (as any true black metaller would). He said simply, "I live in Philadelphia and Absu is located in Dallas. With that in mind, the core will be writing. I'm sure the Texans don't even know how it will all pan out; though Absu never releases the same album twice, it would be wise to never blow out the northeastern candle," referencing a classic Absu song.

So how does he plan to balance his many endeavors now that he's joined the ranks of a massively respected band like Absu, who are still basking in the copious accolades that their self-titled Candlelight release and merciless touring schedule have won them?

"I think it will work out well, though my spectral blades need be sharpened and infused with the vishap's blood at all times. As of now there is too much downtime between tours and albums, to me anyway. When the horn sounds for battle I'll arrive with malice and axes," he answers firmly.