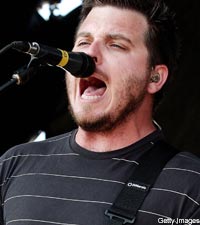 "Sold out. COMPLETELY!" Thank you, box office Post-it note, we got the message -- Thrice showed up June 24 to headline a New York City gig for the first time in ... well, in too long. And no one with a semblance of love for pure rock cared to miss out. Waiting for a proper tour, 10 months felt like a torturously long time to soak in the band's creative highpoint, 2009's 'Beggars,' a masterpiece oozing depth in simplicity, astonishing atmosphere, raw passion ... all those tasty qualities we've been dying to see translated to the stage.

And translate did they ever. Opening with the album's lead-in, 'All the World Is Mad,' Thrice taught a lesson in recreating a lo-fi, garage-recorded album with impeccable panache, the audience vocalizing its enthusiasm with lungs of dynamite. Playing more than half of 'Beggars' in a set that churned across their six-disc catalog, the California four-piece took the Fillmore without fancy accoutrement -- no logo backdrop, no excessively crazy lights or strobes -- all business, in the most spectacular sense.

With the exception of brief spots of swaying softness ('Circles,' 'A Song for Milly Michaelson,' 'Come All You Weary'), Thrice rocked the hell out of the house, becoming an ever-stronger frontrunnier for heaviest not-exactly-metal act in the world. Typically tagged 'experimental rock' or 'post-hardcore,' 'grown-up rock' might actually work best for Dustin Kensrue and company after the display of mature, expertly nuanced jams -- all reflected in the decidedly adult clientele. Thrice once might have teetered the way of Green Day and instead found the path of the Beatles, beginning in an established, unadventurous corner of music and growing into a unique, fearless and creatively satisfied niche.

All of which was front and center at this gig. Cuts from seminal alt-punk LP 'Artist in the Ambulance' melded with the steady rock of tracks like 'Firebreather' and 'In Exile.' The blistering intro to 2005's 'Vheissu,' 'Image of the Invisible,' came out of retirement and had the audience bellowing its chorus as loud as classics like 'Silhouette.' Missing a few seemingly requisite tunes in the set list felt like an afterthought; Thrice play whatever they like and the audience ends up the victor. Kensrue, Teppei Teranishi and the brothers Breckenridge are wont to a stunt like encoring with semi-sleepers 'Stand and Feel Your Worth' and 'Beggars' and letting the suitable genius dawn on you in the final shattering seconds.