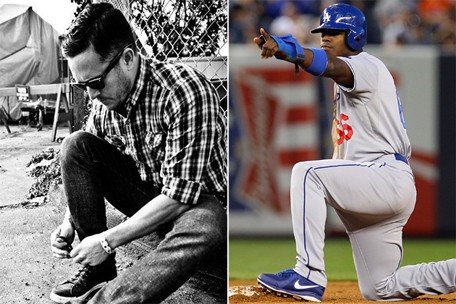 Thrice drummer Riley Breckenridge is a diehard, if not conflicted, baseball fan. Although he swears by the Los Angeles Angeles of Anaheim, he has created a new band named Puig Destroyer named after a star-in-the making for the nearby rival Dodgers. In an interview with Dodgers Blue Heaven, Breckenridge explained how Dodgers sensation Yasiel Puig inspired the moniker.

The group's first song is titled 'One Man, Five Tools,' and it's a reference to baseball players like Puig who have a diverse skillset to their game. Puig actually heard the song and in a Vine video taken by MLB FanCave, he said the song was "very good." Upon hearing Puig's positive reaction, Breckenridge added that he almost "crapped himself," adding that the response the group has received from fans has been "overwhelming."

A crushing new Puig Destroyer album is currently in the works, and it should be completed within a a week or two. The band currently consists of Breckenridge, Kowloon Walled City bandmates Ian Miller (bass) and Jon Howell (guitar), and former Curl Up and Die member Mike Minnick on vocals. As for Puig, the Dodgers rookie outfielder continues to do his crushing on baseball diamond.