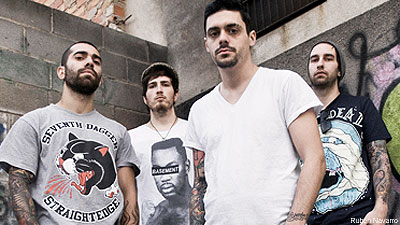 Killer Lyrics: Pull back the skin / Expose the bones / The quest for vengeance all i've ever known / The backlash / I've made my mark / Guilty as charged

"You only live once," Rick Jiminez, guitarist for New York's This Is Hell, told Noisecreep simply. "And I'm sure as f--- putting my time on this earth to the best possible use. Hardcore, music and touring are what makes me happy and fulfilled."

The hardcore/metal band recently signed to Rise Records and is releasing their third full-length, 'Weight of the World.' The title suggests, among other things, the life's pressure to become an ideal -- an ideal to which one might not desire to aspire. The lyrics to 'No One Leave Unscathed' is a step in this philosophical direction.

"Something I find missing in not just music, but life as a whole, is passion," Jiminez explained, on the song's lyrics. "People are too easily sucked into doing what they think they should do as opposed to what they want to do. I could never imagine giving up on something that makes me happy and fulfilled just to please someone else or because its a safer bet. What the f--- is a safe life decision? Going to work 9 to 5 every day because thats what society tells us we need to do to be 'successful and happy'?"

It's an idea with which many fans of punk, hardcore, and metal can identify, as well as those who commit their lives to something as uncertain and turbulent as the music world. "It's a rough life with all the obstacles thrown in front of you to make that happen but it's worth it," Jiminez said of his career choice. "There are politics that go into music that cloud the purity of the goal and there is little to no money to be made which makes living difficult and there are consequences you deal with every day as far as your relationships go ... but almost anything is worth sacrificing when it comes to feeling fulfilled and following your passions."

An inspiration in the writing this song aside from just my own personal feelings, was wrestler Terry Funk, who was one of the forefathers of modern wrestling. Here is a man who wrestled way into his 60s an earned the descriptor of 'middle aged and crazy.'

"He found his passion in life and inexplicably immersed himself in it from a very young age and stuck with it well into middle age," Jiminez said. "He paved his own way in his industry, constantly pushed the limit and surprisingly, never let it go to his head. Throughout his career he championed the underdog. He did what he wanted as opposed to what he maybe have should have done, despite the dangling carrot of fortune and elevated fame. He sacrificed his own spot in the industry on occasion to help others ascend and to make the industry better overall. As far as people outside of hardcore being the embodiment of the spirit of hardcore, Terry Funk is at the top of that list."

This Is Hell are touring all summer in America and the U.K. to support 'Weight of the World.'

Download This Is Hell Songs
Filed Under: this is hell, ThisIsHell
Categories: News
Comments
Leave A Comment
Back To Top