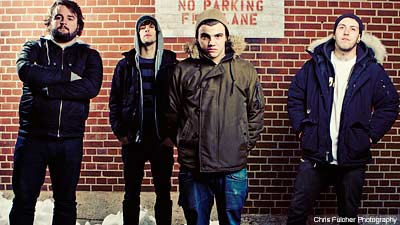 In today's metalcore scene, brightly colored, vividly graphic T-shirts are all the rage and the hottest trend. Long Island's Stray From the Path, which feature a former member of hardcore band This Is Hell among their ranks, aren't trying to tap into a trend and convert it into fast cash. Rather, Stray From the Path are decidedly around for the long haul.

"People are starting to notice what we are doing," guitarist Tom Williams told Noisecreep. "We want to show that we are not out touring to make a whacky-colored shirt and make a quick buck. We care about our music, our live show and our message. And we want nothing more than the world to hear it." The band's most recent album, 'Make Your Own History,' is out now via Sumerian Records.

The band is also managed by Bleeding Through vocalist Brandan Schieppati who was a fan of Stray From the Path's initial release, 'Villains.' Williams said, "We got hooked up with our manager Brandan because he was a fan of our first record and liked what we were doing and where we were headed. He stepped in on this record, and he is perfect for our band because his ethics are in the same mindset as our own."

Download Stray From the Path Songs
Filed Under: Bleeding Through, BleedingThrough, Stray from the path, StrayFromThePath, this is hell, ThisIsHell
Categories: Interviews
Comments
Leave A Comment
Back To Top