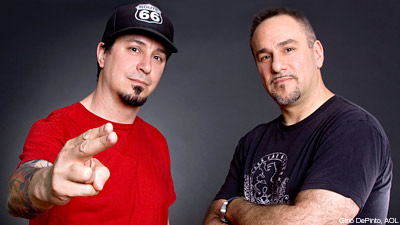 It was clobberin' time at the Noisecreep studios when Sick of It All vocalist Lou Koller and drummer Armand Majidi dropped by for a friendly 'Creep Show' interrogation. Koller and Majidi discussed all things New York hardcore, recounting memories of the characters, such as bouncers, band members and scenesters, that dotted the Sunday Matinee landscape in the mid-1980s, during the scene's heyday.

They also compared and contrasted the American and European metal and hardcore scenes, musing about how metal is a way of life in Europe and how there is much less of a division and a schism between the genres there than here. They also recalled the glory days of CBGB, which now sells John Varvatos clothing in a bit of a sacrilege. Koller joked that you can't even afford a belt buckle there, and it was once the prime real estate of the scene. 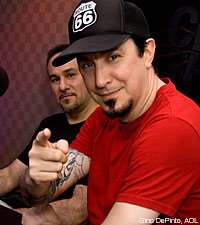 Sick of It All's new album, 'Based on a True Story,' is out now and it's their first since 2006's 'Death to Tyrants.' It's a turbo-charged collection of anthems that prove that SOIA are a New York hardocre institution that continues to make relevant music. The term "legend" gets tossed around far too indiscriminately in rock journalism but the term truly applies to Sick of It All, who also discussed how they choose their set lists according to region and how bassist Craig Setari wants to change up the set list from the 'favorites' that fans demand. They also talk about the strangest mosh pit moves they've witnessed.

Sick of It All were there are the dawn of the NYHC and it's no wonder that even Dashboard Confessional's Chris Carrabba told the band they were a huge influence on him! While SOIA don't make girls cry, they certainly still make music that the kids should care about. So if you've not heard 'Based on a True Story' or if you've -- gasp! -- never heard 'Blood, Sweat and No Tears,' which is an instant classic, then get caught up on your homework. After you watch this episode of the ''Creep Show,' of course! 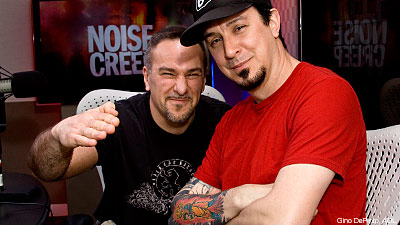 Download Sick of It All Songs
Filed Under: sick of it all, SickOfItAll
Categories: Interviews
Comments
Leave A Comment
Back To Top