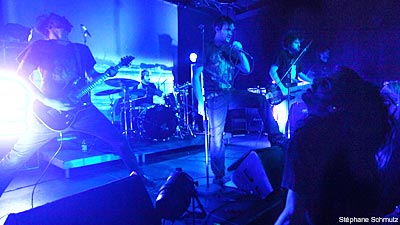 The wait will finally be over sometime in March for fans of experimental metallers the Ocean, when the band releases 'Heliocentric,' the follow-up to 2007's 'Precambrian' and one of two records the Ocean will be releasing in 2010. The second, called 'Anthropocentric,' will be released in October, according to guitarist Robin Staps, who spoke to Noisecreep about the companion pieces.

"We've been working on these albums for a year now, and we're releasing them separately," Staps explains. "It's a two-part concept record, but you'll only get the full picture when you hear the second album. I promise it will all make sense." Even though the albums, as he says, "belong together," the Ocean didn't want to release them together and overwhelm fans, because the discs are very different musically.

"Everyone is going to realize both albums cover a wide range of dynamics, with some really calm songs and some heavy songs," he says. "I'd say the heaviest side of things on the first one comes orchestral, and the second one is a bit more rock, a bit more technical."

Both discs, says Staps, "are a critique of monotheistic religion, especially Christianity, from different philosophical angles. 'Heliocentric' tells the story of the discovery that the Earth revolves around the sun and not vice versa, and the effects that this discovery has had on Christian beliefs, and 'Anthropocentric' deals with creationism, and modern day Christian fundamentalists who still believe the Earth is 5,000 years old, and the dinosaurs never existed and man is the epitome of God's creation."

Staps says he's proud of the work the band has done within the last year and can't wait to finish vocals for 'Anthropocentric' in March. He feels the records are more direct than the band's previous efforts, and they give "people a better picture of what we really sound like. Some of the songs on these albums, fans will never have expected from us. Some songs are just piano and vocals. There are some crushing heavy tunes, and some are more mellow. It's the culmination of two years worth of material and it is all good and I want to get it out to the people who want it."