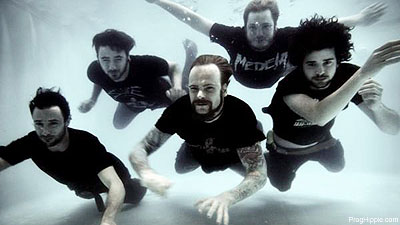 German rockers the Ocean return with 'Heliocentric,' a concept album with lyrics steeped in the history of science. 'Swallowed by the Earth' is one of two songs the band released on Myspace, and the lyrics set it apart from the album's other tracks.

"'Swallowed by the Earth' is a bit of a poetic song, more abstract than the others," guitarist Robin Staps told Noisecreep. "It's basically about not being content with your place in life and whether or not you're going to do something about it ... and in that way, it's related to the question of the eternity of the soul, so here is the connection to the religious frame of the 'Heliocentric' album."

Staps described the storytelling of the album as "non-linear," and he said it involves the popularly held view of the conflict between science and religion throughout history. "The album title makes reference to Copernicus' and Galilei's discovery that the Earth is not at the center of the universe, as proclaimed by the Bible," Stap explained. "But [it is] instead revolving around the sun. All the songs of the album tell the story of the rise of heliocentrism and the effects it had on Christian belief."

The critique of how most people see the conflict between science and religion is used by Staps as a critique of religious belief in general. He quotes a line from 19th century French poet Arthur Rimbaud: "Everything that glorifies God and the afterworld slanders humanity and the real world."

"There is a lot of truth in that quote," Staps admitted. "Christian thinking potentially encourages us to be content with not being content, to settle with what we have rather than seeking happiness in the present tense. But no one of us really knows what's gonna happen to us after our physical death, and chances are that not all too much will happen. It is an existentialist song, in a way, that puts the carpe diem message into a religious context."

The Ocean have various European dates scheduled to support 'Heliocentric.'