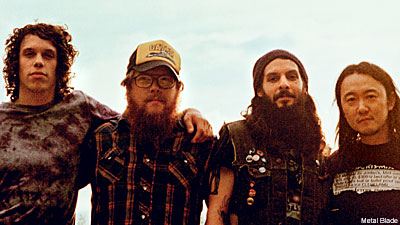 Vancouver's own Bison B.C. have finished recording their third album, 'Dark Ages,' which they'd been working on for several months at Hive Studios. The four-piece band worked with Jesse Gardner, who recorded both of their prior releases. "He's taking us on a dark, mystical, next level s--- kinda journey," vocalist Dan And recently told Noisecreep in a studio update last December. "And [he's] going so far as to even help me out with some arranging quagmires." The album will be titled 'Dark Ages' and has a release date set for April 13 on Metal Blade Records.

In the previous update, And added that "musically, the tunes are leaning towards the 'thrash-doom-sludge-crust-pop-punk-noise-classic-rock side of things.'" After releasing their first album with just a little over 1,000 copies printed, their sophomore came out in 2008 on a freshly-inked deal with Metal Blade. 'Quiet Earth' combines a variety of sludge, thrash, stoner and doom angles in their sound and was really impressive for, at the time, a relatively unknown band.

After touring through Europe to support that record, on which they shared a "huge ass" Nightliner bus with Finland's Medeia, Sweden's Burst and Germany's the Ocean, Bison B.C. joined labelmates Lazarus A.D., Epicurean and Woe of Tyrants on a Metal Blade tour through July and August last year.

With the record done, the band has just finished up a tour with Shadows Fall and Baptized In Blood throughout Canada. After that, they hit up a SXSW showcase with High on Fire and a few scattered dates before beginning a massive U.S. tour with High on Fire, Priestess and Black Cobra in early April.