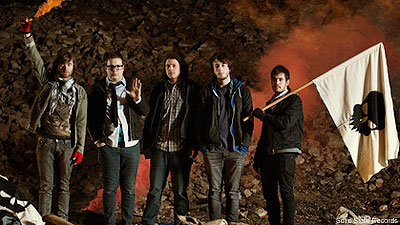 The first release from Douglasville, Ga.'s the Chariot, titled 'Everything Is Alive, Everything Is Breathing, Nothing Is Dead and Nothing Is Bleeding' was recorded live and raw. There were some noticeable mistakes here and there, but the execution was well-done. Since then the Solid State metal band has continued its unpolished work ethic into live music and subsequent recordings, and their new record may follow in the same path.

"Matt Goldman, the guy that's recorded all our records, just hit me up the other day," vocalist Josh Scogin told Noisecreep in an interview. "And they just got a brand new tape machine. Like old-school, not Pro Tools, not doing any digital stuff. And they just got it up and running, and he's really excited about it."

"I was just like, 'The entire next Chariot records needs to be live, straight to tape,'" Scogin continued. "I don't know if we're going to do it or not, but it's definitely something we'd be into. That's where we come from. All of our influences are from dudes that had to do that back in the day. I love the idea of keeping it raw, keeping it real."

Scogin mentioned that on their last record, 'Wars and Rumors of Wars', they wrote all the material opposite of what they would normally do; that is, they thought, "What would the Chariot do here? Let's try and do something else. Let's try and do something the Chariot wouldn't do." The same idea is carrying over to the potential new release. "We always try to keep it open and up in the air," Scogin said. "We never try to set too many things in stone. I could see us doing it, either an entire record or a couple of songs. Whatever the record 'feels' like it needs, we'll do. I can see that happening just because he got that tape machine recently, and it's up and running and he's really stoked on it. We'll see. You never know."

At the time of the interview, there were only some ideas for new songs, but Scogin had plenty of comments on how the process was working: "You start writing, and then you start feeling, you start getting a vibe, and then you're just like, 'Oh, OK, this is where it's going.' And in the last couple of songs you can almost write to mimic that vibe, because you've felt it at that point. Who are we to say where an album's going. You just never know. It's best just to let it grow on its own and let it tell you where to go. I think that makes for a more natural record. That's what we've done always."

"It's funny," Scogin continued on their writing process for the new release. "People ask, 'Well, what are you doing on your next record?' And I don't know. I really don't. We just sort of start writing and feeling it out. You can get into endless discussions about it, where it's like, 'I like where this is going, I like what this is doing.' And then all of a sudden it's like a puzzle that starts falling into place. I kind of like to stand back and watch it happen. It's really pleasurable."

The Chariot, who visited Noisecreep headquarters last year, have select show dates scheduled this coming summer to support their latest release, 'Wars and Rumors of Wars'.