At this point in time, the American hardcore punk scene of the early '80s is finally being recognized as one of the most important cultural explosions of the past few decades. The music by such bands as Black Flag, Negative Approach, Minor Threat and Agnostic Front not only charged up kids around the country to get off their disaffected asses and start up similar groups, but there was also a good handful of people who were inspired by these sounds to pick up a pen and express how this music moved them. Brian 'Pushead' Schroeder, Winston Smith, Shawn Kerri and Sean Taggart are some of the artists considered seminal when it comes to the look of the scene in those early days. One guy who gets mentioned here and there but never given the acknowledgement he rightfully deserves is Kevin Crowley, vocalist for early '80s NYHC band The Abused and the sole artist for all the bands' artwork.

At a time when a skull with an anarchy sign drawn underneath it was considered great artwork for a band, Crowley's art stuck out due to its meticulosity. Universes of hand drawn dots and specs provided the perfect shading to make any skinhead look menacing as hell. The cover he drew for his band's Loud and Clear 7" is truly something to marvel at; the hardcore equivalent to the prog rock record cover your older brother would get lost in after puffing on some of the devils' lettuce.

Ever since The Abused started up playing shows again in the past few years, Kevin has picked up where he left off drawing wise. He's done artwork for the present day Boston hardcore band Waste Management and is currently working on something for an upcoming discography CD by the defunct, early '00s hardcore band, Shark Attack. There's also the official re-release of Loud and Clear coming later this year on the Radio Raheem label.

Noisecreep recently tracked down Crowley to talk about his artwork, NYHC history and what he and The Abused have planned for the future.

Drawing definitely came first. Since I was a little kid I was always drawing something. I wasn't exposed to punk rock until I was in my teens.

Where did you grow up in the New York and how'd you stumble onto punk?

My most formative years were spent living in Chelsea on 16th street between 7th and 8th Avenues. Ironically, when I was younger and well before the hardcore punk scene existed, we lived on Avenue A between 6th & 7th Streets; a stone's throw away from what would become (infamous NYHC club) A7.

I really hadn't listened to any punk music until I got to high school. I always tended to gravitate towards the rebels and misfits so I started hanging out with the punks. The music really struck a chord with me and the scene was the coolest thing I had experienced up until that point in my life. I got completely drawn into it. 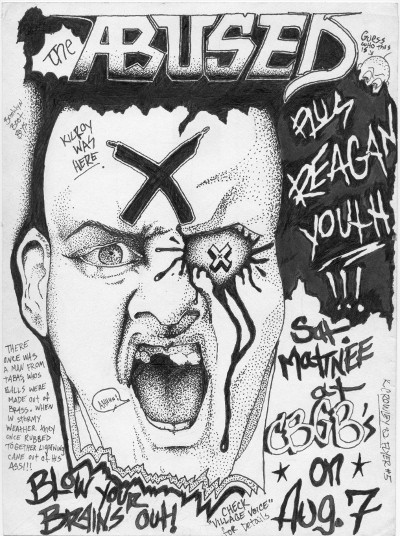 Did you ever have any 'formal' art training? What were your influences in regards to your artwork?

The only formal training I had was in high school; I went to Music & Arts High School. But at the time, my attendance wasn't what you would call exemplary. So, I'm not sure how much actual training I got. In terms of influences, I was really into comic books and that style of drawing; the more macho the better. I also liked fantasy artwork and Heavy Metal magazine. My favorite artist at the time though, was probably M.C. Escher.

I've always marveled at the sonic trajectory of the early '80s NYHC scene. In the beginning, you had these sort of poppy bands like the Stimulators, Even Worse, Nekron 99, etc. And then there's this jump to this totally brutal sounding stuff like The Abused, Agnostic Front, Urban Waste, etc. What inspired The Abused to ratchet it up in regards to intensity and speed?

I think at the time we were all trying to be original and were constantly upping the ante. It became something to aspire to. who had the hardest sound, who played the fastest, who had the shortest songs. That's why we wrote the song 'Blow Your Brains Out;' five seconds of rage inspired thrash. The brutal sound was really a fusion of the music we grew up on like Black Sabbath, the music we listened to before we were punks like Iron Maiden and the influences of other contemporaneous hardcore bands. I guess you could say we all fed off one another which helped the music and the scene evolve.

Listen to The Abused

I noticed that you never did artwork for anyone else back then except for The Abused. Was this a conscious effort to give The Abused a distinctive look?

I wasn't really an "artist for hire". First and foremost, I was the singer of The Abused; it just so happened I could draw. I may have done a couple of things for other bands but, it was so long ago, I honestly don't remember. Because of the technique I was using, the flyers were really labor intensive to produce which is why there is only 12 of them. Actually, I did 13 but never released one of them. There was definitely a conscious effort to give the band a distinctive look. Up until that point not much effort was put into creating visually captivating show flyers. I wanted to make people remember us. I always thought that the way we portrayed ourselves was important. I wanted our music and the artwork associated with the band to be cohesive.

You're acknowledged as the man who 'invented' the NYHC logo. Would you say this is true?

Yes. The hardcore scene was pretty territorial. New York, Boston, D.C; it was almost the way people are with sports teams. Don't get me wrong, I was a huge fan of the music coming out of those other cities, but NYC was my hometown! In a way, the NYHC logo was a declaration of our scene, a statement. The truth is, I never imagined it would catch on like it did.

What brought about the end of The Abused?

We never formally broke up. We were all on divergent paths and slowly drifted apart. Eventually we stopped rehearsing and playing out.

What brought about the reformation of The Abused?

I wouldn't say we've reformed seeing as we never broke up. We just took a long break in between shows. All kidding aside, it was the A7 reunion show in 2008 at the Knitting Factory that got us playing again. The coolest thing was that after not playing together in 20 plus years as soon as we were in a room together, the chemistry and dynamic was the same as it was when we were teenagers.

And what brought about the recent return to doing artwork?

I love to draw. I think over the years a lot of my focus has been on the day to day realities of life and inadvertently, I've made drawing a low priority. But it is a big part of who I am and I have a rekindled interest.

(Here is one of Kevin's recent pieces) 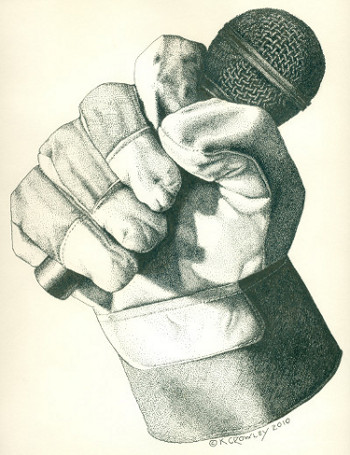 And now the inevitable question: Where are you now?

The Abused have a reissue that should be released by summer. I am doing some freelance artwork and looking forward to doing more. 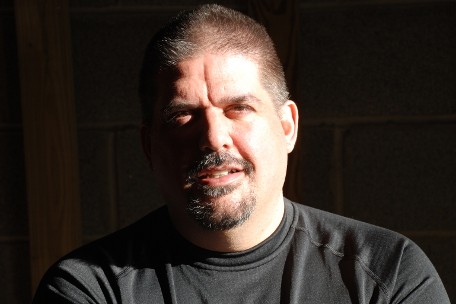 Kevin is currently accepting inquiries for his artwork. If you are interested, feel free to contact him at kevinfcrowley@hotmail.com

Follow @Noisecreep on Twitter | Like Us on Facebook | Sign Up for Our Newsletter
Filed Under: hardcore, kevin crowley, KevinCrowley, the abused, TheAbused
Categories: Interviews, News, Where Are They Now?
Comments
Leave A Comment
A Conversation With Lewis Dimmick, Author of a New Book on NYC Hardcore
Who Are the Pioneers of Southern Californian Hardcore Punk?
Hardcore Punk Historian Travels Back to the ’80s Southern California Scene in New Book
DoubleCrossXX.com: a Chat With Site Founders Tim McMahon and Brian ‘Gordo’ Jordan
The Mob, ‘Back to Queens': OG Hardcore Vets Head Back Home (VIDEO)
Top 10 New York Hardcore Albums
Funko Pop! Dolls of Eddie Munson in ‘Stranger Things’ Metallica Scene Coming Soon
The Biggest Rock + Metal Moments of 1973
Fraudster’s Get Rich Quick Scheme – Steal Sanguisugabogg’s New Album + Sell It on Bandcamp