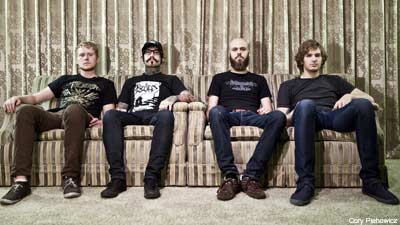 Revolver magazine recently premiered a demo from stoner-metal band Struck by Lightning. Titled 'The Watchful Eye,' vocalist and guitarist Gregory Lahm says "'The Watchful Eye' is about life as we know it coming to an end." Their label, Translation Loss, also features Giant Squid, Irepress and Total F---ing Destruction.

While the song structure itself didn't change much between the demo and master, the demo has a raw, tight quality that fans would love. Their sound has the spirit of basement punk and underground hardcore that thrived about a decade ago, with evil melodies and vocals that perfectly accompany the tunes. The end of humanity is a major theme for Struck By Lightning, whose music focuses on a much darker side of society.

Struck By Lightning kicks off a month of tour dates in their hometown of Columbus, OH in early October, and make stops all along the Midwest and West Coast. Dates and more are up on their MySpace page.