Hardcore vets Strife will be releasing Witness a Rebirth, their first studio album in 11 years, will hit stores on Nov. 6. The Los Angeles combo knows this is a huge moment for them and spent their time with the sessions.

For Witness a Rebirth, Strife brought in producer Nick Jett (Terror) to oversee the project and Iggor Cavalera (Sepultura, Cavalera Conspiracy handled the drums, with the band heading down to Brazil to track all of his parts. Scott Vogel (Terror), Billy Graziadei (Biohazard) and Marc Rizzo (Soulfly), also make appearances on the forthcoming record.

Noisecreep has partnered with the folks at 6131 Records to bring you another behind-the-scenes look at the making of Witness a Rebirth. In this installment, we catch the

Stay tuned for the next video installment! Witness a Rebirth will hit stores via 6131 Records on Nov. 6. 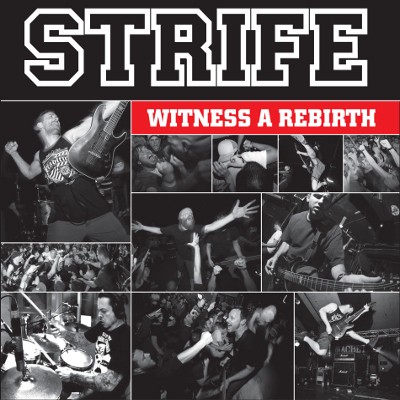 Follow @Noisecreep on Twitter | Like Us on Facebook | Sign Up for Our Newsletter
Filed Under: strife, witness a rebirth, WitnessARebirth
Categories: News
Comments
Leave A Comment
Strife: Los Angeles Hardcore Heroes Want You to ‘Witness a Rebirth’ (EXCLUSIVE VIDEO)
Strife Announce First Album In 11 Years, Igor Cavalera to Play Drums
Sick of it All, H2O, Earth Crisis to Play East Coast Tsunami Fest June 12
Watch Dream Theater’s John Petrucci + Mike Portnoy Play Live Together for First Time in 12 Years
Physical Copies of Slipknot’s New Album Have the Wrong Title on the Cover
How Slipknot’s Jim Root + Mick Thomson Dealt With Their Depression During the Pandemic
System of a Down Fans Keep Scaring Serj Tankian by Yelling ‘Wake Up!’ at Him in Public
Watch Geezer Butler Play Black Sabbath’s ‘War Pigs’ With Apocalyptica
Dave Lombardo Reveals His 5 Greatest Punk Albums of All-Time