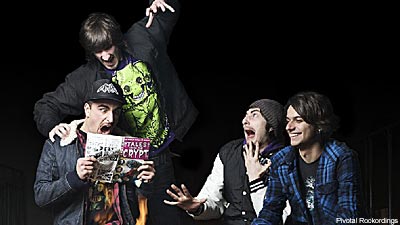 Italian stallions Stigma are currently holed up in the aptly-named Fear Studio, recording the follow up to last year's 'When Midnight Strikes.' So when the band's publicity handlers described the band as "horror-themed," we had to ask the Stigma dudes what their favorite horror flicks are!

"Yeah we're all horror fans, even if just I keep on following new stuff," vocalist Vlad told Noisecreep. "The other boys in the band have their favorites and aren't paying attention to the new stuff. My favorite titles are Bela Lugosi's 'Dracula' and 'The Son of Frankenstein,' just because they have that romantic feeling and those legendary actors who literally gave their face to the characters. I love also' Zombie,' because it's one of the first horrors I watched."

Stigma are working with Bring Me the Horizon guitarist Jona Weinhofen on the new album; Weinhofen will act as producer for the platter, which is due out next year via Pivotal. The Red Shore's Jamie Hope and former Dead to Fall member Jon Hunt will guest on the record.

And you know, we just have to ask an Italian band what their primo pasta sauce is! Vlad said, "I'm a die-hard pesto fan. It's so awesome, especially if it's homemade with a good oil! Sweet!" Mangia!