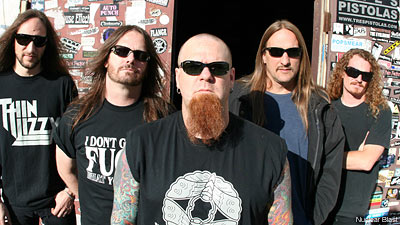 THE GERMAN WALTZ: Currently on tour with Overkill, live footage of Exodus' current tour can be viewed online courtesy of "eblinternational." Following their European run, the Bay Area thrashers will be back on the road in the U.S. with German Thrash metallers in Kreator, Warbringer, and one of Metal Blade's newer acts Epicurean.

BONDED BY BLOG: To those who can not dance in the circle pit with Earache Records' Bonded By Blood; fear not! Currently on the Masters Of Disaster tour with Exmortus and Witchaven the band is now posting daily tour entries. The tour began last week and will be running through until May 1.

DAY OF THRASH: With a tentative release date of March 17 in the U.S., Metal Blade's Razor Of Occam have teased thrash fans far and wide with a new track titled 'Day Of Wrath' from their upcoming release 'Homage To Martyrs'. Hailing from London, England this is the band's third full length release and already shows high expectations of what's to come. Preorder the 'Homage to Martyrs' CD

Filed Under: 752441, 900642, Bonded by Blood, BondedByBlood, exodus, razor of occam, RazorOfOccam
Categories: News
Comments
Leave A Comment
Back To Top