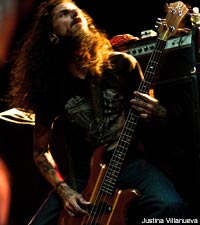 "We're Zoroaster. If anybody knows about anything illegal, please come talk to me after the show. The show." That's how bassist/vocalist Brent Anderson ended Zoroaster's set at Music Hall of Williamsburg on Sept. 21, with an overdose of drug-marinated reverb.

Zoroaster have played New York City a handful of times this year, making their opening for Burst and Gojira the third time this writer has seen them in 2009. They usually deliver an ear- and eye-splintering set with a small-stage light show that would make you think the sun shone in different colors. However, this time around, the Southern doomster trio left the fog and streams of beaming lights at home.

Directly after touring with Gojira and Burst, Zoroaster are heading to Europe with Absu, Pantheon I and Razor of Occam.