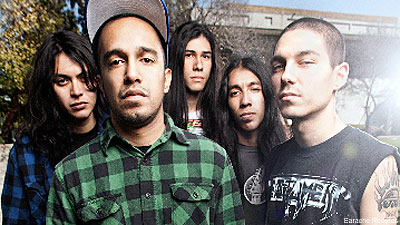 When Bonded by Blood released their Earache debut, 'Feed the Beast,' in 2008 it was known what to expect from the young band. Taking the Exodus thrash classic as the band name laid all the cards out on the table; no surprises, just riffs and a circle pit. But for 'Exiled to Earth,' the California-based band has built off the punk-metal hybrid sound they first fell in love with.

"Every time we write an album we try to present something new so it's not a repetitive album like what we did on the previous album," guitarist Juan Juarez told Noisecreep, in a coast-to-coast phone call marred by static.

'Exiled to Earth' takes on a technical form not seen from the band before, which also led them to seek out producer Ralph Patlan (Megadeth, White Wizzard) to harness the new form of aggression. "We wanted the music to have more clarity to enrich what you could say is slightly more technical [music], so we wanted it to be more clear."

But 'Exiled to Earth' has to be clear, as it's more than just a dynamic step into a new direction; it's also a sc-fi concept album.

In the early stages, no one thought to tie all the songs together for a storyline. It wasn't until the final stage that the idea formed. "For this album at least, lyrics were the last things to be added into the songs," Juarez explained. "As we progressed, we came up with the idea of incorporating that and coming up with the whole story.

"The story takes place 600 years in the future as the economy falls down," he detailed the story, adding volume to his voice in attack against the phone line. While humanity is at its lowest an alien race Crong arrives, creating a new order.

"People pretty much submit to the one world government and are pretty much told what to do, but there is a resistance. There are a few hide underground trying to fight against the Crong." The album highlights taking control back (for better or for worse) when it's been lost.

Juarez explains that the main reason for creating a story like this was to have real world issues take on more power as a message parallel to their concept. "We all do a lot of research online and want to know what's going on around the world. We really wanted to incorporate that into the music and hope it gets the message out to the people.

"We didn't want to be too straightforward in the lyrics so we kind of made it into a fiction story," says the guitarist. "So that's where the whole aspect of the alien part came in."