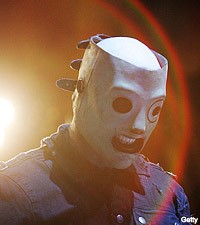 Around since the mid-nineties, Slipknot's rise to fame wasn't exactly fast or easy. Playing clubs, writing music and building a fan base was the order of the day back then. Around the beginning of the new millennium, Slipknot started to click with music fans – and critics. Then came 2004.

By all accounts, every member of Slipknot was riding the wave of success, thanks to 'Vol. 3: (The Subliminal Verses).' A long stint on the Billboard chart and slots on Ozzfest and Download meant the band had arrived, but Corey Taylor almost permanently checked out while staying at the Hyatt on Sunset Boulevard in Los Angeles, Calif.

Taylor tells Kerrang! "I came very close to throwing myself off an eight-story balcony at the Hyatt on Sunset. I was so unhappy. Not about the band but about everything."

Obviously, Taylor didn't jump, and in the weeks beyond the incident decided to give up booze and change his life. "I'd turned into a person who I didn't like and who I didn't respect. It started from that day - I decided not to drink anymore. I decided no more lies, no more crap."

Filed Under: Slipknot
Categories: News
Comments
Leave A Comment
Back To Top