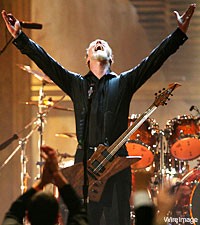 Attention all you metal heads on Twitter - our friends at AOL Radio are having a Twitter Request Day. Requests started just 15 minutes ago (12 PM ET) and it will last until midnight. Tweet your song request on Twitter as follows:

If they have the song, they'll play it the next day at aolradio.com. These "Tweet requests" are going to be heavily promoted across the AOL Network, so they'll be tons of people tuning in tomorrow. Spread the word, and let metal rule 'Twitter Request Day!'