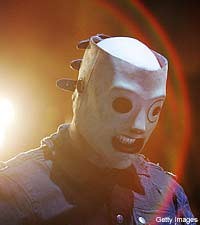 Slipknot, Vegas, Halloween, and Fangoria Trinity of Terrors. What a combination! The possibilities are endless when Slipknot take the stage Halloween night at the Palms as part of the Fangoria-sponsored weekend. So you can imagine Noisecreep's curiosity when Slipknot frontman Corey Taylor gave us this little preview.

"We really wanna make it special," Taylor reveals. "Not only for the fans but for everybody that's gonna be there. I can say that people are going to see something they've never seen before."

Alright, something we've never seen before from Slipknot on Halloween weekend? After a few unsuccessful guesses by Noisecreep, a laughing Taylor says, "I may have to plead the fifth, because it may incriminate me. You definitely have to wait for Halloween night, but I promise it will be so worth the wait." Although he does cross one possibility off the list. "It's not me naked, because too many people have seen me naked. So just get that right out of your head."

The Halloween set is part of a weekend of activities that involve a who's who of people from the horror world. And Taylor is hoping to be one of those fans getting his geek on. "I'm hoping we get in quick enough that I'll actually have an opportunity to not only meet everybody, but kind of check out the convention and kind of snoop some of the movies that are showing on the film festival. I'm so stoked. The geek in me is dying, 'cause I wanna be there so bad," he says.

And if he does get a chance to check it out who is he psyched to see? "Tom Savini obviously, all the old-school guys, [George] Romero, [Malcolm] McDowell. John Waters is incredible. Not only he is just intelligent as hell, he's so out there I would just love to pick his brain. There are so many people that are gonna be there, everybody from Jeffery Combs to Richard Christy, it's gonna be ridiculous," he says. "Scout Taylor Compton, she's gonna be there. Fariuza Balk is gonna be there, who I think is just gorgeous and awesome in everything she does."

We want go back to this John Waters thing. The thought of the man who made 'Polyester' meeting with Slipknot is mind-blowingly fun. "Oh, dude, now you're talking," Taylor says cracking up. "Could you imagine a John Waters short film based around like a video of ours? That would be insane. I'd have to make him go back to like 'Multiple Maniacs' days though, black and white, the army, a bunch of hippies with jeans and fake guns. We'd have to resurrect Divine to have him or her raped by a giant lobster. It's one of those things where it's too good to be true."

We agree, but it's good to dream. We do hope though that last image has nothing to do with what we'll see this weekend in Vegas.