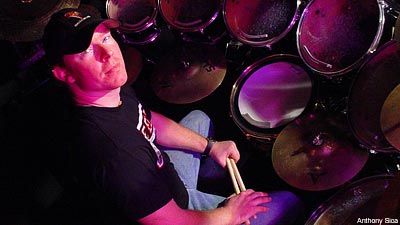 Charred Walls of the Damned's Richard Christy is single-handedly responsible for meta getting airtime -- however brief -- on Howard Stern's radio show.

"It's hard to get straightforward metal played on the show, but I give metal to our bumper guy and he puts it," Christy told Noisecreep. "Anything else has to [be funny] in order to get Howard to play it. With Six Feet Under's covers album, I knew Howard and Artie [Lange] would find it funny because they don't hear that type of vocal every day, and they're not used to it. They laugh, but it's still being played on air."

While Stern and his crew may not be death metal aficionados, the radio legend is incredibly supportive of Christy's musical career. In fact, Charred Walls of the Damned got their name from a prank call Christy made on the show.
"I was calling Christian radio and they put a curse on me and Sal [Governale]," Christy revealed. "They said we will be dragging our fingernails on the charred walls of the damned. They said we're going to hell for prank calling them! So I guess when I go to hell and I am standing next to a mass murderer, he will ask me why I am in hell and I will say, 'I prank called a radio station!'"

Christy isn't worried that his outrageous antics with cohort Governale will turn metalheads off. "Surprisingly, 99 percent of metalheads have a good sense of humor," Christy said. "When I was in Death and Iced Earth, I did the same goofy stuff that I do on the Stern show. During encores, when playing with Death, I'd go on stage in a G-string in front of crowds in Germany. There I was, this pasty Kansan! Me and [the late] Chuck [Schuldiner] would be laughing our asses off. When the crowd realized it was a goof, they'd laugh, too! People will listen to Charred Walls of the Damned and hear good metal."

As of press time, there were no plans for a Governale cameo on CWOTD's debut. "Maybe on tour, he'll come out, do butt bongo on his ass," Christy joked. The album is slated for an early November release.