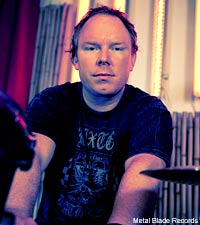 The word supergroup gets thrown around a lot, but most of us can count on one hand the number of groups who truly deserve the distinction of being 'super.' So when it was announced that Richard Christy (Death, Iced Earth) had joined forces with Tim 'Ripper' Owens (Judas Priest, Iced Earth), Steve DiGiorgio (Sadus, Testament) and producer Jason Suecof (Trivium, All That Remains) to form a new project called Charred Walls of the Damned, we were excited about the possibilities -- but careful not to get our hopes too high.

The material was initially written and demoed by Christy. When it came time to record the album, the four musicians never tracked in the same room together, so their chemistry was also hanging in the balance. Well, we've heard their self-titled debut album and we're thrilled to report that the end result is nothing short of spectacular. Charred Walls of the Damned is a supergroup worthy of its lofty label.

Noisecreep asked Christy about his first reaction when he heard the final results, to which he said, "I've been a huge fan of Steve and Tim's work through the years, so I knew whatever they did would be great. But they've added so much more than I had even expected! The bass lines Steve laid down blow my mind so I can't wait for the rest of the world to hear the album."

A winning hybrid of power, technical thrash and death metal, 'Charred Walls of the Damned' is the kind of effort that will undoubtedly end up on many year-end lists come this December. "It's the kind of album that I think a lot of different kinds of fans can get into because we touch several styles. I'm just excited to finally have it coming out, because Jason and I worked so hard on it last year."

Listen for yourself as Noisecreep has the pleasure of premiering the entire Charred Walls of the Damned album in its entirety all this week!