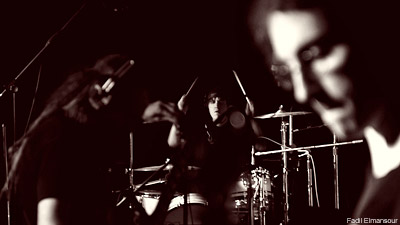 Every city is chock-full of bands all hoping to get more stage time, more chances to snare in new fans, but what does a band do when they feel they have accomplished all they can in said city? For Samothrace and Lethe, the choice was easy: Move to another city, a much bigger city. Dylan Desmond plays bass in both Lawrence, Kan.-born bands that have now transplanted themselves from the jockular home of Kansas University to a place where darker music is more celebrated: Seattle.

"I started kind of feeling like an old man," Desmond confesses to Noisecreep, when discussing his former home. "I was like, 'Maybe it's time to move to a bigger city with a lot more going on, and see a badass show every night of the week as opposed to one or two that I'm really into.'

"They're is a pretty good music scene there, historically and currently, but it's just small," Desmond explains. "And for both bands I'm playing in, the thing we're trying to do is not something that is happening here necessarily."

Lawrence has always been known for a great scene. It's been the home base for many Midwestern indie rock bands that ruled the distros of the '90s, as well as acts like Coalesce who currently call the city home. For Desmond, he found the city had little to offer him in terms of the job flexibility needed for him to tour frequently with both bands. "It's hard as hell to go on tour for a month and come back, and there is no job and nowhere to go look for one because there aren't any places hiring."

"Here in Seattle, I moved in and got a job right away. One of the first things my boss said was, 'Hey. If you ever need to go on tour it's no big deal. I've done that many times before so just let me know.' I just fell into heaven," Desmond gushes. "Where have you been my whole life, dream job."

There's been more change than just Desmond's employment, too. Samothrace's doominess and the stoner sounds of Lethe are getting a very different response live than they did in Lawrence. "There has been more support," Desmond says. "People want to see us rather than people just being there because they're drinking. Which is fine. But that's a very big difference, and it feels really good."

It would be easy to think that moving two bands such a great distance would be something of an impossible quest, but it worked out rather smoothly as the majority of Samothrace's newest members were already living on the West Coast. And for the instrumental Lethe, there were only two band members to move. All in all, only three people had to leave Kansas.

Right now, Desmond couldn't be happier with how the move to the new city has gone, as well as the joy of playing in two very divergent bands. "I kind of feel spoiled, " Desmond happily testifies. "With Lethe, I get to noodle around a lot more, but with Samothrace you hit those big open notes. I have two things that are a lot of fun to play."