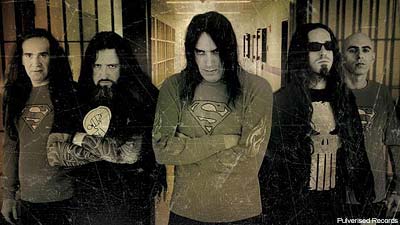 Though the band's press photo above may indicate the obvious, superhero fans Salem -- Israel's legendary extreme metal outfit that has been putting out internationally recognized demos and albums since 1985 -- are focusing on comic book heroes for their seventh full-length and Pulverised Records debut, 'Playing God and Other Short Stories.'

"The opening track, 'Drums of the Dead,' was inspired by a Hellboy graphic story of the same name," explains drummer Nir Nakav. "It's the first time that Abe Sapien goes on a solo mission, and in the promo picture I'm wearing a shirt that carries the insignia of his bureau. Remaining true to form, the other guys in the band took on characters who 'play god' -- Superman with his ability to reverse time (that is why he can be seen in three different places at the same time on the promo shot) and the Punisher, who kills evildoers."

Nakav continues, "As the band lyricist, I feel obligated to add that this album will mark the first time in the band's history that we are not touching on political subjects. The album texts are all inspired by either stories I've read or movies I've watched over the past couple of years. After a quarter of century, it's important for a band to keep moving forward. I believe that once the album is out, the world will witness a tighter-than-ever band with a new twist."

'Playing God and Other Short Stories' will be released later this year on Pulverised. Check out a video from the recording studio right here.