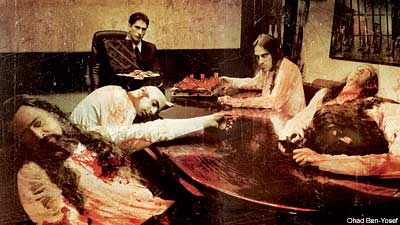 Over the next few weeks, extreme Israeli metal band Salem will be putting up songs on an individual basis to build the anticipation towards their next album. Titled 'Playing God and Other Short Stories,' the 12-song LP will include a cover of Bob Marley's 'Exodus' as well as two vocal appearances by At the Gates' frontman Tomas Lindberg. As of now, the album's opener - 'Drums of the Dead Part 1' -- is up on the band's MySpace page for all to preview. It features vocalist Ze'ev T's at his most raw display, and leaves the listener begging for more.

The band is planning to have a CD release show at Barbie club in Tel Aviv soon (Greece's Rotting Christ just did a gig there), and we can only hope that they make it to America sometime this year. Formed in the mid '80s and brought up with the guidance of legendary black metal outfit Mayhem, Salem have always come through as one of the most fierce bands in Eastern European metal. This new record was recorded at Harold Studios in Tel Aviv and mastered by U.E. Nastasi -- who has also worked with Type O Negative, Fear Factory and DevilDriver -- at the prestigious Sterling Sound in N.Y.C. More tracks from 'Playing God' will become available on their MySpace over the course of the next few weeks. Below you can check out a four-minute long piece of footage that leaked of the album's tracking, featuring guitarist Nir Gutraiman.

Download Salem Songs
Filed Under: At The Gates, AtTheGates, rotting christ, RottingChrist, Salem
Categories: Videos
Comments
Leave A Comment
At the Gates to Play All of ‘Slaughter of the Soul’ on 2022 Tour With Municipal Waste + More
At the Gates’ Tomas Lindberg Thinks World Will Be Better When Today’s Young Adults Take Charge
At the Gates Share Sprawling Metal Opus ‘The Fall Into Time’ From Upcoming LP
The Best Rock + Metal Songs of May – Staff Picks + Essentials
At the Gates Release Dark New Song ‘The Paradox’
At the Gates’ Tomas Lindberg Explains Being a Schoolteacher + Metal Musician
At the Gates Unveil Dark Album-Opening Track ‘Spectre of Extinction’
At the Gates Announce ‘Very Dark’ But ‘Not Negative’ New Album ‘The Nightmare of Being’
Rotting Christ’s Tolis Brothers Inspire New Fossil Name