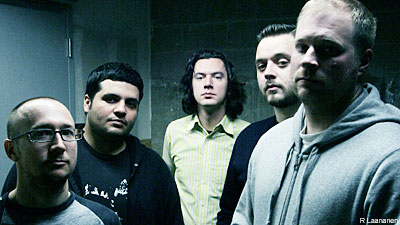 'New Distances' is the title of the hardcore juggernaut Narrows debut full-length and the title is apt as members are spread out living in Seattle, San Diego, and London. With miles separating the band it was first thought touring wouldn't happen but back in December Narrows did a brief west coast jaunt with These Arms Are Snakes headlining, this made guitarist Ryan Frederiksen pull double duty as he plays guitar in both bands. "It was nerve racking but it was fun as shit," Ryan recalls the tour to Noisecreep.

For fans the shows were great; they got to watch Narrows, a band many consider to be a hardcore super group due to the former bands some members have played in, unleash songs that were almost as new to the band as they were to the fans. "Everything we did before that was just writing," Ryan explains, "Spend a little bit of time on a song, then record it via boom box and then move on. We never really got a chance to play in the same room once the songs were done until that tour and we had maybe a few practices."

With the songs so fresh Ryan couldn't just party at the show, he had to study. "I couldn't get drunk as I would have liked to," Ryan laments, "I had my cheat sheet on our set list on how each song started. At that point I didn't know what the damn songs were called."

Once Narrows finished their set Ryan had thirty minutes until it was time to lash out on stage again with These Arms are Snakes. You would think the rest of the band would give Ryan a little slack and play some slower songs letting him rest but "I had no luck there," Ryan says. "But that's what I get for playing in two bands on the same bill. Both bands have to give it their all, or some bulls--- like that. "

But Narrows is planning to tour again. They are expecting to have some east coast dates in September with Doomriders confirmed soon. Hopefully, These Arms Are Snakes won't end up on those shows forcing Ryan to do double duty all over again, but he has his thoughts on how that all happened in the first place and like all good bands revenge may be to blame. "I think it was Rob's idea to get Snakes on the bill as well. I suppose it was Brian getting me back for the Snakes/Russian Circles tour in Europe for six weeks. He had to pull double duty for six weeks and I just had it for seven or eight shows." Ryan laughs, "So payback, it's a motherf---er."

Download Narrows Songs
Filed Under: 926447, Narrows, these arms are snakes, TheseArmsAreSnakes
Categories: Interviews
Comments
Leave A Comment
Back To Top