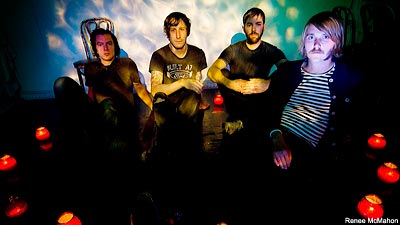 Since 2004, These Arms Are Snakes have been spreading their own flavor of post-hardcore through constant touring around the world and releasing three full-length albums and numerous small players on vinyl in between. Many people have wondered when the band was going to head back to the studio to create a follow-up to 2008's 'Tail Swallower and Dove,' which was the most successful release for the band. Well, These Arms Are Snakes have an answer, and it's a big bummer. "It's with a heavy heart we tell you that These Arms Are Snakes is no more," the band stated in a press release yesterday.

Avoiding the cliché of saying the band comes to an end over personal reasons, no clear explanation is given. On their most recent tour this past fall, These Arms Are Snakes showed classic signs that their time was up, or they were just uncertain, by selling only old merchandise that just been found and letting fans rummage through for a discounted price. The band spoke with no excitement of any new material in the pipes.

The entire final statement from the band is littered with the brash humor that These Arms Are Snakes were always known for by mixing genuine gratitude for all that have supported the band with below-the-belt shots at those who have not helped the band, like their first label home (Jade Tree Records) and people not paying for their albums.

"It's been a great run and we'd like to send out a very hearty 'Thank You' to everyone that we've worked with or anyone that we've toured with; anyone that lent us a floor, towed our van and / or trailer, lent a van, given us a listen, downloaded our records prior to their coming out, bought our s--, or asked us where our band name came from; everyone who cooked us food, made habanero-infused tequila, had a safety meeting with us, let Steve gyrate all over you, had to live with any of us, made us pay shitloads of money to get off your punk label, got us into 'LOST,' found Steve drunkenly wandering the streets of Tokyo alone, played Madlibs in the van (plural nouns), lost money promoting one of our shows, took Chris to the hospital, put up with our drunken sorry asses, got into a fight with us, etc., etc."

As of press time only two known These Arms Are Snakes songs are left unreleased, one for a Nirvana tribute and the other for a split with fellow Seattle friends Minus the Bear. Guitarist Ryan Frederiksen is currently in the hardcore outfit Narrows, bassist Brian Cook is still in Russian Circles and drummer Chris Common is on more records than we can list due to his engineering and studio work. There's been no word on any projects on the horizon for the vocalist, Steve Snere, who was part Burt Reynolds and part Iggy Pop on stage.