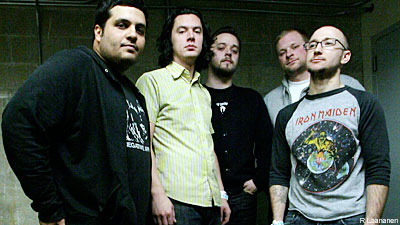 This past November, the multi-coastal -- and multi-country -- band Narrows pulled off their first East Coast tour, with a few Southern dips in the route, that many (including members of the band) thought was never going happen due to the battles with schedules and the miles that separate members of the hardcore supergroup that features members of Botch, Unbroken, These Arms Are Snakes and Tropics.

Recently, vocalist Dave Verellen caught up with Noisecreep and gave us a recap of how the tour went, as well as relayed some excitement over the plans for an upcoming European tour next year, saying, "As soon as all the venues realize we are playing at them, we'll have a fistful of shows and no budget. It's always a gamble, because you just don't know what kids are into at the second. Hopefully we'll have some good experiences and not have to sell the farm."

The plans for the small East Coast tour began months earlier, all the way back in May, when Narrows first full-length, 'New Distances,' had just been released. The plan was to open for a bigger band, and the band that stepped up first was Doomriders, but soon after, they had to bail because of bassist Nate Newton's obligations in Converge. "You never what's gonna happen until you're actually pulling up to the venue," Verellen tells Noisecreep, admitting a worry he had that the eight-date outing would have never happened. But luckily a recently reformed band had some dates Narrows were able to be added to. "I gotta say thanks to the Cave In guys for letting us hop on those shows with them. I know it wouldn't have been the same without them."

Each night of the tour the members of Narrows took the stage with no house lights warming the stage -- instead, the band plugged in their own lights from behind the drum kit -- determined to make the moment they started cranking out music more grand and furious, as their shadows reached to the ceiling.

With the band juggling so many time issues, they don't get to practice that much together, which makes the tightness of the band on the road all more stumbling. "Thankfully the members are really good at what they do, and by listening to our songs and practicing a couple times before the tour, I think we were able to pull off a pretty good show," Verellen says.

Between his scream and their home-spun lighting, it's easy to compare Narrows on stage to his former band, Botch. "Well it's just as fun," Verellen muses when discussing how both bands are a kin in presence. "I think the show itself is similar just in the fact that with our songs the same 'personas' overtake us, and all the sudden the show is over and you're trying to remember how your pants split open at the crotch ... some differences are reduced bickering, but I think it's because this band is still in infancy and we haven't figured out what to hate about each other yet. But mostly it's great. The guys in this band are all friends -- some new, some old -- but we're all just glad to be able to do this."

Verellen recounted one of his favorite moments from the tour, one where he left his body so to speak. "Calling everyone in the room a f---ing dick at the Baltimore show ... then feeling bad and hugging it out with all 49 people that attended. Tequila is pretty powerful stuff." But when it comes down to it, the Brooklyn, N.Y. show was his cherished memory. "It just went off without a hitch, we got to play our set and the venue and crowd were great. And it was especially good to see a lot of old friends."

For many this tour was one to kill doubt that the band could hit the road at all, as well as for some older guys to let loose again, as Verellen describes what Narrows is on stage as "five old men trying to act like they're 24 again (as in the year 1999, not current 24-year-olds), and we like what we play and seems like the people do, too. Can't ask for much more."