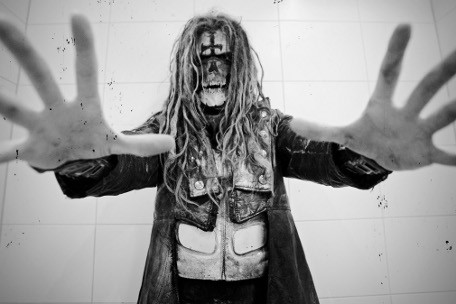 "The television commercial world pretty much works like the film world in the sense that the way you get work a lot of the time is by ad agencies seeing something else you've done and then approaching you to do something else," Zombie tells Noisecreep in an exclusive interview. The iconic rocker is on the line talking about the upcoming series of television commercials he directed for Amdro Ant Block, a pest control product.

Known for his feature film hits (Halloween, House of 1000 Corpses), it's not the first time Zombie has directed a TV ad. In 2011, he directed a commercial for Woolite called "The Torturer" (seen below) that also became a viral sensation. "The Woolite commercial turned out to be very successful in the world of commercials. It ran a lot and ended up getting a lot of attention. I'm actually having fun working in that world."

Since Zombie's movie projects are famously passion projects for him, Noisecreep asked the rock renaissance man if he also had a wish list of products he could direct television commercials for: "Not really. Commercials aren't something that I really think about it, unless I'm working on a specific project. Commercial opportunities have just come in from out of the blue.

"But I will say that I do watch television commercials differently now that I'm directing them. You start seeing them with a technical eye. I've actually had to turn down some commercial stuff because of timing and schedule issues. What I've liked the most about working on these commercials has been the fact that I get to "direct" more. Meaning, feature length films take a long time, so I don't get to do too much other directing with everything else I have going on. With these commercials, I can knock them out in one or two days and still get to keep my directing chops up," says Zombie.

Zombie then tells us what he thinks the main differences are, artistically speaking, between the cinema and commercial worlds are: "When you're making a movie, it's your baby from the ground up. With a commercial, you're being hired to make this thing to sell their product. We're talking about companies that have been selling their products for decades. Who am I to come in and tell them how to do that? You just don't know the demographics behind the kinds of people these companies want to reach.

"At the same time, I don't just want to come in as just another director they hired. I want to bring in my own lighting guy, art director, set designer and all of that stuff. The companies that have hired me have been cool about that, but I don't see why they wouldn't be. It's like, if they are hiring me, the only way I can guarantee to deliver what they want is to have my crew of people working with me. If I'm surrounded by a crew of people that I don't know, or feel comfortable with, it would kind of be like getting on stage with some musicians I just met. There's no way I could guarantee that the show would be that good."

Besides his film and advertising work, Zombie jumped into the television drama arena directing an episode of CSI: Miami in 2010: "The only time I ever directed something without my regular crew around me was that. It was a horrible experience. I tried really hard to make it my own thing. I even hired actors that usually just work in feature films. I brought in guys like Michael Madsen, Malcolm McDowell, and William Forsythe, and they did a great job. I think the episode came out OK, but it was still disappointing. The whole experience just proved to me that I shouldn't take on these kinds of projects if I'm not going to be able to work with the people I pick. I don't just want to be a director-for-hire like that."

Lords of Salem, Zombie's fifth feature film, will be released later this year. He'll also be heading out on a co-headlining tour with Megadeth in May. To purchase tickets, visit www.robzombie.com.