Today, horror fiends will be flocking to their local cinemas to catch a screening of Rob Zombie's latest frightmare, Lords of Salem.

Starring Rob's beautiful wife, Sheri Moon Zombie, Lords of Salem tells the tale of Heidi, a radio station DJ living in Salem, Massachusetts, who receives a strange wooden box containing a record, a "gift from the Lords." As she listend to the strange sounds coming from inside the box, she starts getting horrific flashbacks of Salem's brutal past.

Noisecreep writer Mike Gitter recently chatted with Rob Zombie and got some insight on the inspiration behind Lords of Salem and if there's a connection with his upcoming Venomous Rat Regeneration Vendor album.

On the new record there's a track called "Lucifer Rising." In other interviews about Lords of Salem, you mentioned that you were influenced by Kenneth Anger's film Scorpio Rising in terms of cinematography. Is that song a tribute to the movie in any way? Was there any synergy between Venomous Rat Regeneration Vendor and Lords of Salem?

No, there's really no synergy between the record and the movie on any level except the vibe, I think. I don't even know if that even comes through. I did both projects so close together and I was bouncing from one thing to another. I put the editing room in a barn in the middle of the woods, then I ripped that out and then I put a recording studio in there. Both projects were very isolated when they were being done. Usually, you're in Hollywood, the phone's ringing, everybody's annoyed by traffic, management and record people are coming in. This time, both projects were isolated and I think that for me they blurred on a certain level. Where? I don't know. Definitely in my life, that's for sure.

Growing up in Massachusetts, not too far from Salem itself, what is it about that area that's fascinated you?

I hadn't been to Salem since I was a kid and it really wasn't until I went back and looked around. Massachusetts has a cool [H.P.] Lovecraft vibe you don't find anywhere else. Being in New England with the ancient cemeteries and churches and gravesites, you get a vibe that you just don't get in Burbank. [Laughs] I hadn't really been to Salem in a long, long time so I went back there and looked around and explored it and that's what really inspired the movie. It's such a unique town. The architecture, the way the streets are, where the water is. It has a vibe. I knew I wanted to go there and make this movie.

Have you seen, heard or read any books, music or comics that have inspired you lately?

I haven't read any comics in a long time. I'm probably more up to speed on movies than anything. I watch lots of movies. I watched a movie last night The Paperboy with Nicole Kidman and Mathew McConaughey. It was great and I really liked it. Truthfully, I was really inspired by the camera work. Sometimes I couldn't focus on the movie because I was so caught of guard watching the camera and cinematography. 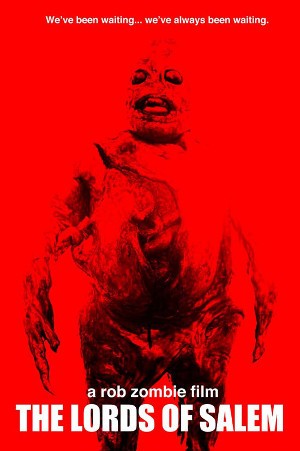 Lords of Salem is in theaters now.

Follow @Noisecreep on Twitter | Like Us on Facebook | Sign Up for Our Newsletter
Filed Under: lords of salem, LordsOfSalem, Rob Zombie, RobZombie
Categories: Interviews, News
Comments
Leave A Comment
The 5 Best Zombie-Themed Music Videos, Picked by SpiritWorld’s Stu Folsom
Rob Zombie Once Did a Commercial for Laundry Detergent
Metallica’s Kirk Hammett Reveals His Go-To Horror Movies for Halloween
Rob Zombie Explains Why He Hasn’t Watched Any of the New ‘Halloween’ Films
Rockers’ Favorite Horror Movies + Where to Watch Them
Hear 2 Tracks From Rob Zombie’s ‘The Munsters’ Soundtrack Right Now
Judas Priest, Bullet for My Valentine, Jinjer + More Withdraw From Aftershock, Replacements + Daily Lineups Announced
‘The Munsters’ Go From Black and White to Color in First Trailer
Rob Zombie Unveils Detailed Look at New Herman Munster for ‘The Munsters’ Movie