Anno 2013. No rest for the wicked, weary or one Rob Zombie. In the space of a mere few days, the Zombie shadow will be once more cast upon the land: in the form of a new Rob Zombie album, Venomous Rat Regeneration Vendor (due April 23) but more profoundly with the unveiling of his long awaited new film, Lords of Salem (April 19). Both are already garnering their fare share of - Shock! Surprise! - enthusiastic word of mouth. The mind boggles and the senses tingle!

Not merely has Zombie unleashed a record that huffs in the dust of his 25-year musical existence: from the cyclopean shamble-groove of classic White Zombie to the sexed-up sonic grindhouse oeuvre that's become the good man's calling card since hopping in his Dragula with 1998's Hellbilly Deluxe. As a filmmaker, he's also stepped up his game, moving beyond the visual single mindedness of his earlier works and concocted a genuinely smart, stylistic horror yarn.

Now in his late forties, you get the feeling that this Massachusetts native with a two-headed-monster of a career: equal parts rock icon and cinematic auteur, is having a blast. Not only is he readying for a Summer onstage headlining the Rockstar Mayhem Tour but he's also prepping at least one new film, The Broadstreet Bullies, his first venture into non-horror-but-equally-violent turf: a hockey flick set in the 1970's telling the tale of the most despised team in the NHL, The Philadelphia Flyers.

Noisecreep hunkered down with Senor Zombie to chat about Lords of Salem and his other cinematic projects. Welcome back to Planet Zombie, motherfuckers!

Growing up in Massachusetts, not too far from Salem itself, what is it about that area that's fascinated you?

I hadn't been to Salem since I was a kid and it really wasn't until I went back and looked around. Massachusetts has a cool Lovecraft vibe you don't find anywhere else. Being in New England with the ancient cemeteries and churches and gravesites, you get a vibe that you just don't get in Burbank. [Laughs] I hadn't really been to Salem in a long, long time so I went back there and looked around and explored it and that's what really inspired the movie. It's such a unique town. The architecture, the way the streets are, where the water is. It has a vibe. I knew I wanted to go there and make this movie.

You were definitely were exposed to the vibe of the area from early on. I've read interviews where you said you grew up next to cemetery. Is that true?

It sounds like a bullshit story you make up to fit your image or something but there's a cemetery everywhere in Massachusetts. There were no parks to play in so where did we go play as kids? In a cemetery, of course! We cut through the cemeteries to go back and forth to school. The first school I went to, this brick schoolhouse, was on the edge of a cemetery. You ran past the school and you were in the cemetery. It was always there. You watch movies and you look outside and you're like 'Wow, this Hammer film has the same vibe as the town I live in! This is so cool!' It just kind of fed into it.

At one point you were attached to a remake of The Blob. What were you going to do with that film as a reboot?

The Blob was something that came to me that I wasn't really sure about. First of all, getting any movie made is close to impossible. My first inclination was 'I don't know if I want to re-make The Blob, but I do want to keep making films.' As the project progressed I just lost interest in the whole thing. I had just done the two Halloween films and I didn't know if I wanted to do something that was a pre-existing idea. I would have changed it a lot but still, the title is the same. There was something so confining about it that I just walked away from it.

Your next film project is a hockey movie, The Broadstreet Bullies. It's about the Philadelphia Flyers in the '70s, right?

Right! And the film after that, which I can't mention because the rights aren't secure yet, isn't anywhere in realm of horror. I don't have any plans for anything horror on the horizon for many years.

Are there any existing franchises or books that you would like to take a stab at some point?

Probably, but any time I see anything that makes me think 'that would be great,' I go and do some research and it seems like it's already been scooped up. It's amazing how there's nothing left. It seems like the rights are gone before the book is even published these days. What would I be interested in? I love stuff like the Cormac McCarthy books - anything in that world. Chances are the rights are already scooped up!

If you were starting out now as a musician, filmmaker or visual artist, would you have a different approach to your work? Would it be different than the way you started in the '80s?

I would probably approach things in the same way. Probably the biggest difference these days is how to reach people. I was thinking about that the other day. Think about fanzines back in the day. People would just xerox fanzines and hand them out. Basically, you would only reach tens of tens of people. Nowadays, what used to take a band a year of playing gigs, passing out flyers and doing fanzine interviews, you can accomplish with one Facebook ad.

Now, I can get the word out on something so quick that it would take the record company forever to get the word out on. We released the video for 'Dead City Radio and the New Gods of Supertown' this morning. Thousands and thousands of people have already seen it where in the old days it would have gone to MTV and it would still be sitting there waiting for the one play it might get at 4AM on Saturday night so one kid could tape it and give it to his friends. In some ways it might even be easier now than it was before but there's also a lot more competition out there but then again, there's always been tons of competition.

It still is down to inspiration and vision.

Have you seen, heard or read any books, music or comics that have inspired you lately?

I haven't read any comics in a long time. I'm probably more up to speed on movies than anything. I watch lots of movies. I watched a movie last night, The Paperboy with Nicole Kidman and Matthew McConaughey. It was great and I really liked it. Truthfully, I was really inspired by the camera work. Sometimes I couldn't focus on the movie because I was so caught of guard watching the camera and cinematography.

Did you see the remake of Evil Dead yet?

No, I probably won't get around to it. Truthfully, I never really go see movies like that. It just isn't interesting. I was really excited when I saw the first one in 1980-wheneverthefuck that was. I walked into the 8th Street Playhouse in New York and I was like 'Holy fuck! This is nuts!' so thirty years later, I don't really have any desire to go to my local Movieplex and see it again.

If you could be any other musician, artist or filmmaker in history, who would you be?

Well, whenever I look back on the '70s, I always think that would be the time to be a band. I would be anyone back then. That would have been the time. I don't care who it was. It seems like it would have been a lot of fun. It could have been Led Zeppelin, Mott the Hoople or Alice Cooper or the Allman Brothers. I missed that era big time! Who would I want to be? I'm not someone who thinks 'I wish I was somebody else' or 'I want to be somebody else.' I guess when you're a kid you do think about things like that but once you realize that it's not gonna happen, you stop thinking about it. I'm OK where things are now. 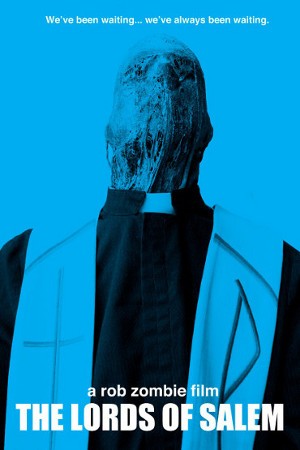 | Like Us on Facebook | Sign Up for Our Newsletter
Filed Under: lords of salem, LordsOfSalem, Rob Zombie, RobZombie
Categories: Interviews, News
Comments
Leave A Comment
The 5 Best Zombie-Themed Music Videos, Picked by SpiritWorld’s Stu Folsom
Rob Zombie Once Did a Commercial for Laundry Detergent
Metallica’s Kirk Hammett Reveals His Go-To Horror Movies for Halloween
Rob Zombie Explains Why He Hasn’t Watched Any of the New ‘Halloween’ Films
Rockers’ Favorite Horror Movies + Where to Watch Them
Hear 2 Tracks From Rob Zombie’s ‘The Munsters’ Soundtrack Right Now
Judas Priest, Bullet for My Valentine, Jinjer + More Withdraw From Aftershock, Replacements + Daily Lineups Announced
‘The Munsters’ Go From Black and White to Color in First Trailer
Rob Zombie Unveils Detailed Look at New Herman Munster for ‘The Munsters’ Movie