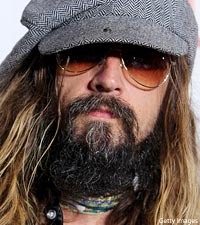 Next week, Rob Zombie is going prime time. On March 1 at 10 PM ET, CBS will air an episode of "CSI: Miami" directed by Zombie. The auteur, best known for horror movies like 'Rob Zombie's Halloween' and 'The Devil's Rejects,' started working on the show in mid January and wrapped the shoot two weeks ago.

"It was a totally new experience for me," Zombie told Noisecreep. "I had never directed TV before, and directing TV is very different from directing films. It was exciting, because I had gotten offers over the years to direct television shows, and I had always turned them down or it never fit my schedule. And this was the first time it all made sense."

Zombie doesn't want to reveal too much about the story, in which, after a murder, Horatio Caine (David Caruso) and Eric Delko (Adam Rodriguez) take a trip to Los Angeles to try to clear Jesse Cardoza (Eddie Cibrian) of tampering with evidence. The script for the show was written by co-executive producer Barry O'Brien but tailored for Zombie, who cast various actors, including Malcolm McDowell, Paul Blackthorne, William Forsythe, Michael Madsen and Zombie's wife Sheri Moon Zombie.

"I got to work with some actors I've never worked with before, like Michael Madsen, who I was always a big fan of," Zombie said. "And [guitarist] Billy Gibbons from ZZ Top is in the show, and he was interesting as a person. He's a cool guy. He flew in and did a little cameo playing guitar during a scene, and it was just a good time and very weird to see. It's going to be an interesting episode."

While Zombie's episode of "CSI: Miami" is far from a psychedelic orgy, the director was able to bring a little bit of the Zombie rock life to the set. "That's how I kind of tried to lend my flair to the show," he said. "There was a scene where the David Caruso character, Horatio, goes to get some information from this photographer. And I said, 'Well, let's make the photographer a rock photographer, and if it's a rock photographer let's have her doing a photo shoot, and if she's doing a photo shoot it should be somebody real who's an actual rock person.' And it kind of spiraled from there."

Which is where Gibbons came in. "I went through a list of people that I thought would be cool," explained Zombie. "I needed someone who would be instantly recognizable no matter who they were. So if you're watching the show at home, you wouldn't go, 'Wow, I wonder who that is.' And I couldn't think of anyone more recognizable than Billy Gibbons. As soon as you see him you go, 'Hey, it's the ZZ Top guy.'"

With his first TV directing credit behind him, Zombie has no immediate plans to return to the set of another television show, but he enjoyed working on 'CSI: Miami' and doesn't rule out an eventual return to TV. "I might do it again in the future -- not necessarily 'CSI,' but maybe for another show if something else pops up."