Rival Sons, the soulful hard rock outfit from Long Beach, Calif. recently released Head Down, their second album for Earache Records. Formed in 2008, the group's '70s throwback sound -- reminding many of Led Zeppelin, Humble Pie and Deep Purple -- has made them hugely popular throughout Europe. Still an underground act at home, the quartet even grace magazine covers overseas.

The Sons just got back home after another massive European run, playing festivals while also headlining their own sold out shows. Oh yeah, they also found time to open some dates for a little group called Guns N' Roses.

Bluesy, ballsy and real, Rival Sons are fronted by vocalist Jay Buchanan, who recently took some time to talk with Noisecreep about their icon status in Europe, along with what turned him on as a young singer.

Jay, many fans really seem to appreciate the organic, unprocessed sound of your band.

The way we record, you're always hearing us play a song for the first or second time. We only do one or two takes. We typically only give ourselves three weeks in the studio. We go in with no new material so we have to write everything on the spot - everything. And so as soon as we arrange the songs, get the lyrics together, we just give it or two passes and that's it. That's how we approach what we do in the studio.

Why do you do it that way?

We do it that way because we are musicians, so we naturally procrastinate [laughs]. We're beach guys. So it says a lot about how we approach things. We delay things till we have to do them. So we make sure it's all honest and reactive. We create that situation where it forces us to be immediate and in the moment with whatever we are thinking musically at that moment. That immediacy, that immediate energy, is key for us.

You have been embraced so incredibly in Europe. Talk about that.

We're on a label based over there, in Nottingham, called Earache. It's the premier indie metal label and when they approached us, we were like, how do we fit in? We're a rock 'n' roll band. But they have fantastic ideas and connections and so we can tour over there for a month and hit 16 countries - you could spend a month over here just in Texas! [laughs] So we've just been focused over there a bit more and have been fortunate that we really caught on. So it's the effort that's helped us over there. Next year that will shift somewhat, and those same efforts will be made over here. But yeah, they get us over there for sure. We've got an insane relationship with European crowds.

I've seen some of the videos. It looks nuts.

Sellout crowds all over, covers of magazines, awards - it's kind of surreal. Then I come home and I've got like eight different kinds currency in my pocket. The intensity and trajectory over in Europe is something we greatly value and will obviously continue to feed as much as we can.

You're a throwback kind of frontman - intense, down to earth - what influenced you growing up?

My hometown is Wrightwood, Calif. Nice and isolated. I grew up hiking and snowboarding, so music was an intensely personal thing for me - it was my television and my books. It meant everything to me. Everything from Bob Dylan, Jimi Hendrix, a lot of blues, but what really got me was being in church, and hearing my mom singing in her beautiful, honest voice. Her voice was truth; her heart. Like my grandma's voice, too. Just incredibly honest singing and vocally that was very important to me. But I was shy as a singer starting out. I'd go in my room and turn the lights out. That's how I learned to sing the truth and be honest. I just can't get up there with one foot on the monitor, pulling a Captain Morgan and checking out the girl in the front row. I'm not built for that. For me, music is about communication. That's what matters.

Do you see much live music growing up?

Going to see Steely Dan with my parents was big deal. I remember seeing Buddy Guy and B.B. King play live, but what usually got me was watching Saturday Night Live and waiting for the musical guest. Or Austin City Limits. Just channel surfing late at night for music. I never had a TV Guide. I'd just search late into the night. That's how I learned. 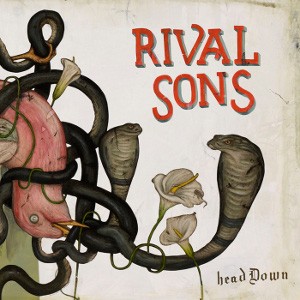 Rival Sons' latest album, Head Down, is out now via Earache Records and available on iTunes.