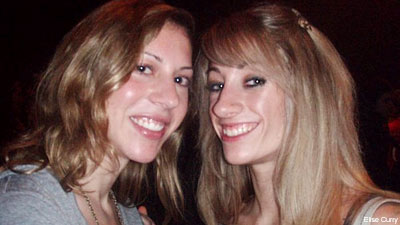 For all the damage it has done on the music business, the internet has had a great effect on heavy metal. Besides the mountains of information and new avenues of music discovery, one of the most important things the internet has accomplished is giving every fan the ability to have a voice. The advent of blogging and its immediacy has given everyone from musicians to the average fan the chance to share their thoughts, admiration and disdain with anyone who has an internet connection.

Although there are countless blogs focused on the world of metal and hard rock, it seems like the overwhelming majority of them are still being written by males. That's where ReignInBlonde.com comes in. Launched in 2009 by Elise Curry and Julia Collier, the blog has quickly found an audience with its quick-witted observations on all things metal. Noisecreep spoke with the ladies of ReignInBlonde.com and got the lowdown on the inspiration behind the site, which acts they think are over and underrated in metal, and why they aren't fans of Leaves' Eyes.

How did you guys meet and did Howard Stern have something to do with it?

Elise: No, Howard Stern had nothing to do with our meeting (laughter). Julia and I met during a summer internship at a radio station in upstate New York a few years ago. A bunch of us showed up the first day and my ears perked up as I heard this (back then) dark-haired girl talking about how bad the Ozzfest lineup was that year. I had another internship later on at Howard Stern, and was able to also get Julia an internship at Sirius through the people there.

Julia: Elise interned for Stern at Sirius in the Spring of 2007, and later helped me land an internship with Martha Stewart Living Radio in Summer of 2008.

Growing up, what were the bands that initially got you interested in metal?

Elise: I watched a lot of MTV as a kid. It was funny because I'd always have to change the channel whenever my mom came in the room because she thought that stuff was "garbage." That and my local rock radio station introduced me to bands like Alice in Chains, Nirvana, as well as Faith No More, who are my all-time favorite band. By high school, I got into a lot of stuff besides what was on the radio. I eventually dove into all things Mike Patton and discovered a bunch of bands because of who had worked with him. That's how I came to love the Dillinger Escape Plan, who are also a favorite of mine.

Julia: I got into metal when I started high school. I've always been into music, but before I found metal I wasn't really into anything. I would listen to whatever but didn't really find anything that excited me. One day my friend Mary had me listen to some Arch Enemy and even though it initially scared me a little, something just clicked in my head. The rest is history as they say. From there I found Hatebreed, As I Lay Dying, Pantera and Meshuggah. My tastes and music library has just exploded into a big old lovely mess from that point on.

Did you read a lot of music magazines and were there any female writers that you looked up to?

Elise: I've honestly never been a big magazine reader, and unless you count books, I never really noticed bylines until this whole 'blogger' age came into play. Blogs give me a sense of who the person is as I'm reading their stuff day-to-day, and I like that. But I actually find it really hard to relate to most female bloggers, in general. Many seem like they're always fighting something, whether we're talking feminists or Carrie Bradshaw wannabe's who want to complain about much men have ruined their lives. I don't get into that sort of stuff. I have no cause or agenda. I just want to be 'me' and talk about silly stuff that makes me laugh. Most of that happens to be metal-related.

Julia: I used to read Metal Edge faithfully, but we know what happened there. These days I read Revolver and Decibel, and pick up Metal Hammer and BW&BK whenever I can. As far as female writers go, the only person that stands out to me as someone I look up to would be Amy Sciarretto. She is so accomplished and is a true testament to how hard work pays off- if you're willing to do it. If not, someone else will.

How did the idea to start your own metal blog come about?

Julia: This is quite the magical story! About a year ago, I was visiting Elise in New York during my Thanksgiving break and we were going to see DragonForce -- which ironically is also the first metal band I think we saw together- and we were playing around with Elise's new camera. After a couple drinks, Elise suddenly stops mid-sentence, points to a couple guys and yells "... and that guy is totally staring at your ass!" To which the dude in question replies "No! I was commenting on her Dillinger bag!" We ended up hanging out with said guys (who are now good friends of ours) for the rest of the night and at a restaurant after the show (while Elise is filming) Seth makes a comment about winding up on "Boys-at-random-metal-shows-dot-com". When we watched the video the next day, that idea clicked for us. We're used to standing out at shows and we know we're not the typical metal type, so why not start a website about our love for metal? I don't remember how long it took us to come up with the name Reign in Blonde, but once we did, it was a doozy from there.

Do you think the online metal world needs a stronger female voice?

Elise: The girls are definitely out there in the metal media, but it always felt like a vast majority of them were either straight-laced journalists or ultra sexed up chicks with tongue rings who host their own TV show. I don't mean to knock those people, but that's not who I am. Reign in Blonde is not Blabbermouth, and it's not Mistress Juliya, we're Elise and Julia (no Y). We're girls who like heavy music, but are also really silly and sarcastic ... so it's a different spin on things. Not everyone is going to dig it, but I suppose it shows people that the metal community is actually a lot more diverse than previously thought.

Julia: I don't think it's a matter of a female versus a male voice; the metal community just needs strong voices period. I mean, metal isn't music for wussy, weak people so if you're going to actively represent the metal world in a journalistic/blog forum you need to uphold every ounce of your convictions. Chuck Klosterman once made a statement along the lines of "no one listens to metal to feel depressed, they listen to metal to feel empowered." That's exactly how I feel when I listen to metal and the reason why it has become a huge part of who I am and how I live my life. Elise and I try to present a different point of view about the music we love, which probably has to do a lot with the fact that we're both women, and pretty girly ones at that. We don't 'look the part' and we are interested in a lot of different things besides metal, like baking, fashion, pop culture ... but that doesn't mean that we don't know what we're talking about.

You've been vocal about your dislike for Liv Kristine from the band Leaves' Eyes. What's your gripe with her?

Elise: I don't think this is the 'Clash of the Blonde Titans' or anything, but she had a post on Deciblog.com recently on why women in metal are awesome. To me, it had a very 'holier than thou' tone to it, and she just sounded like an idiot. I don't think I should want to be interested in someone's band just because there's a female in it. I want to listen to bands because they're good, period ... regardless of gender. I do think women are capable of anything a man can do, but with that said, I don't like Liv Kristine's music, or most female-fronted metal in general. Maybe I'm just being mean, but where's the fun in having a blog if you can't tease people every now and then?

Julia: Ugh. Well, personally I just don't like Leaves' Eyes 'cause their music bores me to tears. I can get behind some nerdy metal, but Leaves' Eyes is the musical version of Magic cards and Harry Potter, and I just can't get behind it. Recently Liv Kristine has said some things about women in metal that I just don't relate to, like, or even respect. Plus, I just can't stand it when people who aren't Japanese wear kimonos on a constant basis.

We know you aren't crazy about top 10 lists but we have to put you on the spot. Who are the 5 most underrated and 5 overrated bands out there right now?

Elise:
Underrated:
1. Sinergy -- I actually do like SOME female-fronted bands. Kim Goss's voice is a force to be reckoned with.
2. Horse the Band -- I feel like most people think they're stupid, but their new album is definitely one of my favorites this year.
3. Torche -- Last year's 'Meanderthal' definitely deserved a lot more credit than it got.
4. Gods of Fire -- They're friends of ours. The most epic Jew metal band you've ever heard.
5. Septic Flesh -- So dark, so eerie, so intense ... I'm surprised more people haven't taken notice.

Overrated:
1. Korpiklaani -- They're one of the most popular Pagan bands, but I think they're one of the worst. I don't care how many songs you've written about beer, it's not that interesting.
2. Belphegor -- Just ... awful. Pretty much the worst band with the best logo.
3. Shadows Fall -- Besides the music not being all that great, how many times has their singer knocked someone out with his hair?
4. Hatebreed -- I think Jamey Jasta is really cool, but I feel like he's just yelling at me like a drill sergeant.
5. Steel Panther -- I don't understand why everyone thinks this is so funny. If I want comedy, I go to SHAT!

Julia:
Overrated:
1. Halestorm -- Yes Lizzy Hale can sing, but it's not metal enough for me.
2. Slipknot -- I've always said that if a band looks scary, their music should be scary as well. It's not.
3. Tool -- Just never got into it.
4. Chickenfoot -- The dumbest name for a 'supergroup' ever.
5. Suicide Silence -- Everyone raves about them, but I don't see anything special about them. They're not bad, but they're not great either. Am I missing something?

Underrated:
1. Kittie -- I can't deny it, I always been a huge Kittie fan. The new album is one of their best.
2. Eluveitie -- After seeing them live, I have a new respect for the 'Hurdy Gurdy.'
3. Demon Hunter -- Even though they're Christian metal, I really think their melodies are killer.
4. Himsa -- A great band that I just don't think gets enough attention.
5. Luminis -- (sarcastically) They are a N.J. Euro femme metal cover band. Oh gee, I don't know how they haven't caught on to the masses!