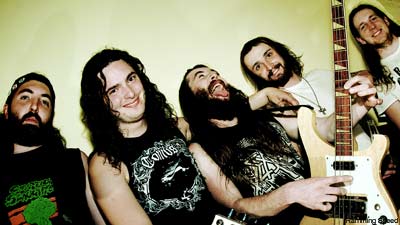 Boston's gnarliest band of bro-dudes, Ramming Speed, have been enjoying a hell of a year, criss-crossing the European continent, signing to the mighty Candlelight Records and rolling down the East Coast and across the entire U.S. with Cannabis Corpse on a chemically-altered DIY tour.

"We started 2009 off with an east coast tour before laying low for the winter to write and record some new music," Jonah tells Noisecreep. "This summer, we did an epic, two-month full European tour that included everything from Iceland to Czech Republic and released a new seven-inch called 'Always Disgusted, Never Surprised' on Punks Before Profits. We're currently on a six- week trek with our buddies Cannabis Corpse and our full-length 'Brainwreck' was re-released by Candlelight Records this fall in both Europe and the U.S. Somewhere in the mix we lost a bass player and found an even bigger loser willing to throw his life away for the power of metal."

Anyone familiar with Ramming Speed's basement-tested, hesher-approved sonic assault will understand why Candlelight was so quick to add them to the roster, and longhairs across the nation will rejoice to hear that a new album is already in the works. Citing influences like Terrorizer, Discharge, Charles Bronson, Megadeth, Cryptic Slaughter and, of course, Iron Maiden, the band is about as far from generic thrash as they come, which Jonah attributes to its members' love of all things heavy.

"We sprinkle plenty of crust, grind, and rock 'n' roll into our riffs and the result is something far from rehashed 'retro' metal," he said. "It's all grounded in thrash, and we love all the bands in the '80s that made this music exciting, but to ignore everything awesome that's happened with heavy music in the last 20 years would be silly. As a band, we listen to plenty of music besides thrash and it all finds its way into the jams. You have to keep music fresh with new ideas or it gets stale real quick."

When your band has already toured Iceland, played to thousands of crazed grind freaks in the Czech Republic and smoked its way across the nation with a bunch of ganj-obsessed Virginians, what could possibly left on your to-do list? Apparently, to jump ship and head for the islands. "This year we're gonna hit up Puerto Rico, go back to Europe, do the U.S. again, release another crappy fast paced s--- storm and continue the downward spiral that is playing in a rock band. Three cheers!"