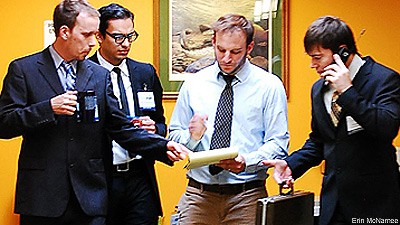 Hardcore has had some interesting offshoot sub-genres over the years. Everything from Krishna consciousness (Shelter, 108) to straight edge (Bold, Trial), has been represented by small armies of bands throughout the years. That brings us to Powerpoint™. For those of you who work in the corporate world, just imagine the stuffy guys from the finance and legal departments letting loose and playing '80s styled hardcore. Not only do Powerpoint play their live sets in proper office attire, they also apply their bullish corporate way of thinking to their lyrics. If you thought Ian MacKaye's lyrics in his Minor Threat days were unflinchingly assured -- you haven't heard anything yet.

Lyrics like "An army is on the rise in their polos and their khakis, Schooling all the bosses and the rookie intern lackies" find Powerpoint delivering their message and dream of a white collar utopia. With franchise branches in New York, Denver and San Francisco, Powerpoint are employing the same business tactics that Fortune 500 companies use to get the word out about their mission statement.

In this world exclusive, Noisecreep spoke with Powerpoint East Coast branch manager Benj Gleeksman, and asked him to explain the corporation's philosophy.

Did you guys meet as interns, or did you form Powerpoint after hooking up at some kind of business conference?

Trevor Graham (Exexcutive Sales Strategist) and Vin (Vintern, Rocky Mountain branch) proposed the idea one night shortly before the dot com crash. Trevor and I were both working for Sawed Off Financial, a well-known Denver brokerage house. Like most major corporations, Powerpoint started with a dollar, a dream and a visionary team of venture capitalists. It took a few years of planning, relocation and resignations from our previous companies to finally get Powerpoint off the ground.

How about on the business side of things?

You mention bands like Youth of Today, but do you think Ray Cappo would be comfortable with a group with such a corporate-minded mindset naming his band as an influence?

We don't like to toot our own horn, but I believe that our proven track record of mosh-driven results speaks for itself. If Mr. Cappo is interested, he is more than welcome to review our impressive annual statements available on our corporate Web site – www.myspace.com/pptinc – I think that he would be enthused to be associated with an organization as successful and recognized as ours. If you were to ask 300 people in today's business scene who they thought would lead us through the recession, I bet that at least two would say Powerpoint. And that's something to be proud of.

Most of the members of Powerpoint are upper management in their respective companies. One would imagine that your schedules are pretty packed. How do you find time to rehearse?

At Powerpoint, we adhere to the DIY (Delegate It Yourself) ethic as part of our company's culture. We believe that the best way to get something done is to delegate it to a willing and competent support staff who knows the business well. That said, upper management meets annually or bi-annually at one of our two main locations -- Denver or N.Y.C. -- to review important matters and to rehearse new agenda items before scheduled live presentations.

Tell us about the way you utilize your interns as part of your live presentations.

We have three interns -- one in N.Y.C., and two in Denver. Each brings his/her own unique skill set to the table, and their roles frequently change. Naomi, our newest Denver intern, has shown great strength in marketing strategy -- she recently wrote one of our agenda items herself, which is a [two-minute] presentation about sexual harassment in the workplace. Our interns also show our Powerpoint slide show while we present, and they frequently sell our marketing collateral to new customers. Often they initiate group team-building exercises during especially explosive parts of our live seminars. Our interns are eager, willing participants in our seminars, and they continually impress middle management with their enthusiasm and respect for today's business scene.

Powerpoint has some really interesting merchandise. Instead of just having the standard T-shirts for sale, you also have useful items like pens, coffee mugs and a zine version of Forbes magazine. Are the kids at your shows buying this stuff up?

We see our merchandise as one of the crucial pieces of our brand. For instance, Forbes Zine is a great medium for speaking to today's youth market about important, pressing issues in the business scene. It gives solid reporting on organizations that have turned their backs on the scene, changed their ways and stabbed each other in the back. Our mugs are our most popular piece of collateral however. They tend to sell well because the logo wears off in the dishwasher, so people buy them again and again. That is true brand loyalty.

We've been in a financial recession for the past few years, so I have to ask you, how in the world have you managed to maintain Powerpoint franchise offices in three separate states?

Powerpoint may have three locations, but we stand together as one. One of the main things we support is unity in the business scene. Black, white, male, female, young or old -- we are all in this together and we believe that through hard work, we can make a change and see the light at the end of the tunnel. We have presented to audiences large and small -- as few as three people, and as many as 25. But no matter what we stay true to what is in our hearts. Our core brand, core values, and core customer base is what helps us put the core in corporation, and that's the bottom line.

These days it isn't that uncommon to see beer and liquor companies sponsoring rock and metal tours. Can we expect Business Week or CNBC getting behind a Powerpoint tour sometime in the near future?

In June we will be doing our second presentation at ABC No Rio conference center in N.Y.C., which is a huge venue. This will certainly be noticed by some of the country's largest brands, so it is not out of the question that we could partner with another large entity for a corporate speaking tour.