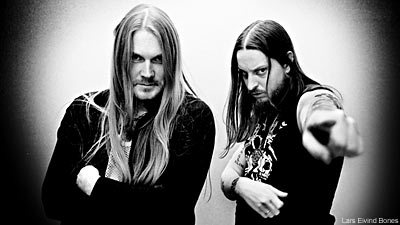 Black metal veterans Darkthrone have a new album lying in wait -- and what better way to preview the album and tease the die-hards than to set up a mini-website for the forthcoming 'Circle the Wagons'? The site includes all the expected modern fancies like wallpapers, web banners, galleries and track samples. It also contains the duo of Nocturno Culto and Fenriz listing their picks for albums you must own and a band of the week blog, though that part is still in the works.

The band's 14th album promises to take the duo even farther away from the early Norwegian black metal sound they first began straying from on the 2006 album 'The Cult Is Alive.' The last time the band talked to Noisecreep Fenriz confirmed this by citing old-school hardcore bands like Bold and Cro-Mags as 'Circle the Wagons' influencing factors. "These bands there is a strong base -- strengthening, redeeming, self esteem -- and a lot of contempt," he explained.

In a statement from the band within the mini-site the album's attitude and goal is given light. "With our own brand of heavy metal/speed metal/punk, we are a constant ambush on the modern overground metal traitors. Join us in our fight against instant gratification ... and let's see who stands when the smoke clears ..."

Part of the fight against the digital want-it-now attitude has 'Circle the Wagons' coming to vinyl March 8 with a digital download code included and the CD release a month later on April 8; those digital codes won't work until CD hits shelves. Making analog first will defiantly keep the mediafire links and torrent sites at bay for a bit, and hell, showing some patience never hurt anybody.

'Circle the Wagons' features art by way of Dennis Dread, who also did the visual darkness for the band's previous two albums 'F.O.A.D.' and 'Dark Thrones and Black Flags.' According to the band the nine songs on the album break down to five speed metal tracks, "heavy metal songs a la 1979-1985 tempo pace," and four songs in a regular metal tempo.