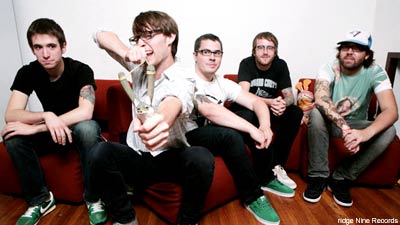 Polar Bear Club just released their second full-length, 'Chasing Hamburg,' on Bridge Nine Records. Not coincidentally, they're currently on the Bridge Nine Tour with the likes of Strike Anywhere, Crime in Stereo and Ruiner. Noisecreep caught up with vocalist Jimmy Stadt between shows to see what was going on.

How is the Bridge Nine tour going? How did the Pittsburgh stop go? I wasn't able to get to it.

The tour is awesome! Pittsburgh has always been a tough town for us. We have some kids who like us there, but not a lot. We will be back in November, so come out then!

I know you're into comics. Do you collect or just read? Have you made any special stops yet on the B9 tour to grab some issues?

Hahaha. How did you know that? I don't collect. I'm strictly a trade paperback guy. There have been some cities where I have taken the van to get to a comic store. I'm reading 'The Boys' now and about to get into 'Scalped'.

How is the acting career going? Being on tour so much probably puts a damper on it, but then again you might be able to network more as you travel.

I don't have an acting career, really. The band takes up all my time, so acting and theater is something I'll go back to later on. And I definitely will. I love it very much.

Your new EP is a well-known Seinfeld reference. What was the motivation behind naming the release that? Are is PBC big fans of the show?

Yeah, we love Seinfeld. We needed a title for the EP and thought that was perfect. You can try and glean some deeper meanings out of it if you want, but it's more just fun for us.

Lastly, any tour-related tragedies or weirdness that you would care to share with Noisecreep?

The smells that come out of some of my bandmates are pretty tragic and weird.

Filed Under: Crime In Stereo, CrimeInStereo, polar bear club, PolarBearClub, Ruiner, Strike Anywhere, StrikeAnywhere
Categories: Interviews, Tours
Comments
Leave A Comment
10 Underrated Albums of the Early 2000s According to Trash Boat’s Tobi Duncan
Polar Bear Club’s Jimmy Stadt Is Proud to Be From Rochester, N.Y.
Texas In July Won’t Back Down on ‘1000 Lies’ — Song Premiere
Ruiner Break Up After Six Years
Every Time I Die, ‘After One Quarter of a Revolution’ — Video
Seraphim Explain Why They Tour So Much
Every Time I Die Taking Their Junk on the Road, Expect the Unexpected
Ruiner Fine With Hardly a Day Off on Upcoming March Tour
A Plea for Purging Tour Up From the Floor Up Report: Good Days, Bad Days