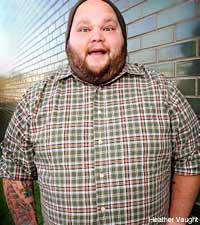 So it's inevitable that tour will have good days and bad days. I's not a bad thing, its just life. Tour is like anything else in life, school, work, etc. It definitely is a lot of fun and I love it, but some days just aren't gonna be as sweet as others. Hence today.

A few of the dudes and myself slept in the van last night cause the house we were staying at with Hundo was pretty crowded. I woke up a bit tired but it was decent van sleep. After waiting on some of the dudes to come out, we left for some breakfast. After a tasty waffle house chicken biscuit, Damifino (our merch guy) and I went walking around a JC Penny. Yeah I know, we're pretty stylish. Ha. After fashion time we had a few hour drive.

Today's playlist for me included, but not limited to: Gasoline Heart, New Found Glory, Polar Bear Club and Bleach.

Upon arriving at the venue, we are greeted with the info that our friends in We Came as Romans as well as their whole tour package would be playing our show. As much as well love those dudes, it was a bit to handle.

Playing a seven-band bill is never a good time as a headlining band, especially on a school night. As a headliner, you never wanna play super late on a school night, or there will be no kids left to see you band. Well with seven bands on a bill, it's hard to get the show rolling without cutting all the support bands' set times.

Since I am acting as tour manager, I'm the guy that has to be the jerk to everyone and tell them they don't get to play all their songs. It's a real bummer to drop that news sometimes. Tonight WCAR had a lot of tech problems and didn't get to play but a couple songs. That was a raw deal for them. I think they should trade the ipods for acoustic guitars! They always work! Haha.

Nah, I'm kidding. Those dudes' new CD just came out today. Go order it at equalvisionrecords.com. Also check out Tides of Men. They were awesome, too!

So anyway, the show was long and stressful, but the kids were cool and we're always stoked to get to jam for some kids and meet some new band buds.

Now we are driving to St Louis to sleep at our friend Justin's house. Tomorrow we play Springfield, Ill. at The Black Sheep. I love that place. Total punk rock club.

Next post should be full of punk rock fun!!