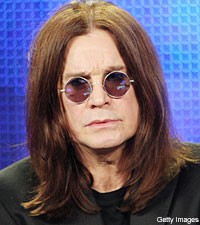 Don't expect a reunion of the original Black Sabbath lineup any time soon. With his former Sabbath band mates Tony Iommi and Geezer Butler touring and recording with Ronnie James Dio (Osbourne's replacement in Black Sabbath when he left the band in 1980) as Heaven and Hell, Ozzy Osbourne is suing Iommi over the rights to the Sabbath moniker according to the 'New York Post.'

In a suit filed in the U.S. Trademark and Patent Office, Osbourne's lawyers allege that the guitarist for the heavy metal giants has claimed sole ownership over the Black Sabbath name, one of the most valuable and revered in metal music. Osbourne, who states in the suit his "Signature lead vocals" led to the band's "extraordinary success," citing a dive in their popularity during his 1980 - 1996 separation from the group, is seeking 50 percent ownership of the moniker.

In a lengthy statement, Osbourne expressed his remorse over the whole incident. "It is with great regret that I had to resort to legal action against my long term partner, Tony Iommi, but after three years of trying to resolve this issue amicably, I feel I have no other recourse... Throughout the last 12 years, it was my management representatives who oversaw the marketing and quality control of the 'Black Sabbath' brand through OZZFEST, touring, merchandising and album reissues... Tony, I am so sorry it's had to get to this point by me having to take this action against you.I don't have the right to speak for Geezer and Bill, but I feel that morally and ethically the trademark should be owned by the four of us equally. I hope that by me taking this first step that it will ultimately end up that way. We've all worked too hard and long in our careers to allow you to sell merchandise that features all our faces, old Black Sabbath album covers and band logos, and then you tell us that you own the copyright. We're all in our 60's now. The Black Sabbath legacy should live on long after we have all gone. Please do the right thing."

While Iommi and Butler have been touring and recording with Dio as Heaven and Hell, rather than the Black Sabbath name they first performed together under following Osbourne's 1980 departure from the fold, Iommi's sole proprietorship apparently dates to a dispute with Live Nation, who he sued in December of 2008 for contiuing to sell merchandise with the band's likeness and logo following the expiration of their exclusive licensing deal in 2006. Once that deal ran its course, Iommi took over the rights to the trademark and name.

In a 2007 interview with Spinner, Iommi talked about working with the two metal gods, Osbourne and Dio. "It's just two sorts of different music in a way and different singers altogether," Iommi said. "When I sit down with Ronnie I realize how creative he is. It was very good for me to be able to work with someone that you can bounce off like that and create something quick instead of it taking a long time. With the Ozzy situation it normally takes longer because we sort of put something down, then we see if it's suitable for him or he'll sing with it a bit, then we'll change it."

However, Iommi had praise for both of the Sabbath vocalists. "Two great people."

Hopefully Osbourne and Iommi remenmber that when its time for the next Ozzfest. 'Sabbath Bloody Sabbath' is only supposed to be an album title.