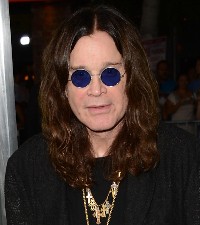 Some things aren't meant to be in life and just sound wrong once you utter the words. You know, like Ozzy Osburne being a vegan. The Blizzard of Ozz attempted to adopt a completely animal-free diet, but it was an epic fail. In fact, he is eating more meat than ever after his incredibly short, meat-free stint.

Ozzy, who went vegan for less than a month in 2012, told Rip It Up, that he tried to purge his diet of animal byproducts, but confessed that he wasn't all Yoda about it. You know Yoda's mantra. "Do or not do – there is no try." Yeah, well for Ozzy, there was no do, even though he did try. We'll give him that much.

"I tried it, but I didn't last more than a week or two," he admitted. "I'm eating more meat now than ever!"

The only animal meat he has yet to consume? Horse. "The only meat I haven't touched is the horse they're eating over here. I'll eat anything," he said.

He admitted that the notion of Ozzy-as-vegan was a bit out of the ordinary, since he is most notorious for biting the heads off of avian creatures. "How can the guy who bit the head off several creatures suddenly turn full circle and now live on vegetables?," he mused. "That doesn't sound right. I was Satan last week, now I'm on some fucking do-it-yourself gardening experience."

Instead of a vegan diet, Ozzy is now subsisting on a low-carb, high-protein diet to stay in shape, since he is, after all, a senior citizen. "I've dropped 30 pounds and I exercise like a freak. I'm 65 this year. God only knows how I got that far - I should have been dead a thousand times," he joked.