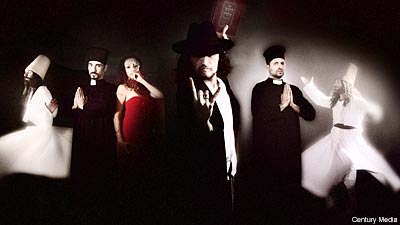 Israeli metal band Orphaned Land -- who will visit the U.S. next month for a spate of tour dates -- found the crew that filmed the video for 'Sapari' featuring Shlomit Levi through social networking

"The crew who did the clip? I found them on Facebook," vocalist Kobi Farhi told Noisecreep. "I was desperate and I published a status that we were searching for crazy students when Shahar Hemo and Matan Cohen contacted me. We felt safe with them from the first moment. Their devotion ... I could see that this is their whole life during those days. We are perfectionists, and they were the ones insisting and we didn't mind compromising."


Farhi said that the crew's pre-production was impressive, as they built the set for the actor's scene from scratch. Farhi said, "The result is far from what I imagined; it's simply brilliant. I can feel it's an eastern metal band. The spiritual aspect is well-executed, the band footage in this big hall is just amazing! But of course that is for you to judge."

Before you watch Noisecreep's exclusive video premiere, featuring enchanting female vocalist Shlomit Levi, it's important to understand the deeper nature of the song. "'Sapari' means 'tell me' in Hebrew and is a 17th century poem written by Sa'adia ben Amram, a Jewish poet who lived in Yemen back then," Farhi revealed. "The song is a duet between the poet and his soul. The poet seeks for his soul and asks her where is 'she.' The soul, described as a dove in the song, answers that 'she' is at the high chamber, heavens, preparing herself to wear the shape of a human body. In a way, this song reflects the inner search that every human is going through. We are getting to know ourselves more and more each and every day, and our journey here is far from being easy."

The video for 'Sapari' featuring Shlomit Levi, which appears on 'The Never Ending Way of ORWarriOR,' which is out today, is meant to reflect man's inner search for spirit. "The actor, Matti Atlas, was filmed in a room, sitting in a box, writing scared stuff," Farhi said. "This is the exact way they used to sit and write in the old days in Yemen. He is writing, searching. At some point, he starts to freak out, to write on the walls, on his body, getting even possessed in a way. He is alone, confused, searching for answers and meaning, just as we all are."