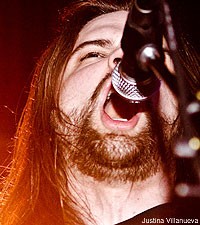 "Are you ready for some Celtic metal?!" Suidakra frontman Arkadius Antonik asked the crowd at BB Kings on March 8. Of course they were ready! The German death metal band played after the more mellow Gwynbleidd and before Orphaned Land.

"On the last tour I asked every night for your support. I want to see your arms, legs and tits," Antonik exlaimed. I don't know what he was expecting from the crowd, but I can assure you there were no boobies flashed. Not even in an ironic way from men. Zilch on the chest department. However, that didn't stop the band from engaging everyone into the show. It was pretty unavoidable, actually.

Everyone clapped and chanted for just about every song. When the four-piece played Highline Ballroom a year ago as a part of Pagan Knights Fest, they had the same healthy response. Except for one key show ingredient: moshing.

On Sunday night, a mosh pit broke out but it was interrupted by BB Kings security. And by BB Kings security I mean just one guard. But trust me, he could have shielded an entire wall of death. That's not to be a fat joke; dude was just that buff. Even though it was king of a bummer to stop people from pushing each other, it was probably the best decision considering the venue size ratio to people at the venue.

Suidakra will be celebrating their 15th year anniversary as a band in the beginning of April. After 15 years of being a band, I'm sure there will be more opportunities for them to return to a mosh-allowed venue around New York City.